A couple Mondays ago we were preparing to depart our coastal abode to venture Auckland-way to pick up our first wave of Canadian visitors. Then we realized… they actually arrive on the Tuesday. We laughed it off and enjoyed our day free from visitor-preparation!

When the day actually arrived, Joel and I took Crumpy for a drive just shy of 3 hours- armed with the (now traditional greeting) gift of L&P and pineapple lumps.

It was really great to see Jamie and Michelle at the arrival gate and we were grateful for the drive time home to catch up and share news. Good friends are such a rich blessing, aren’t they?!

We dropped off bags and picked up Brandon and Stacey before heading to The Mount for the burger deal at Astrolabe (which was a hit for $10- burger, fries and a drink). 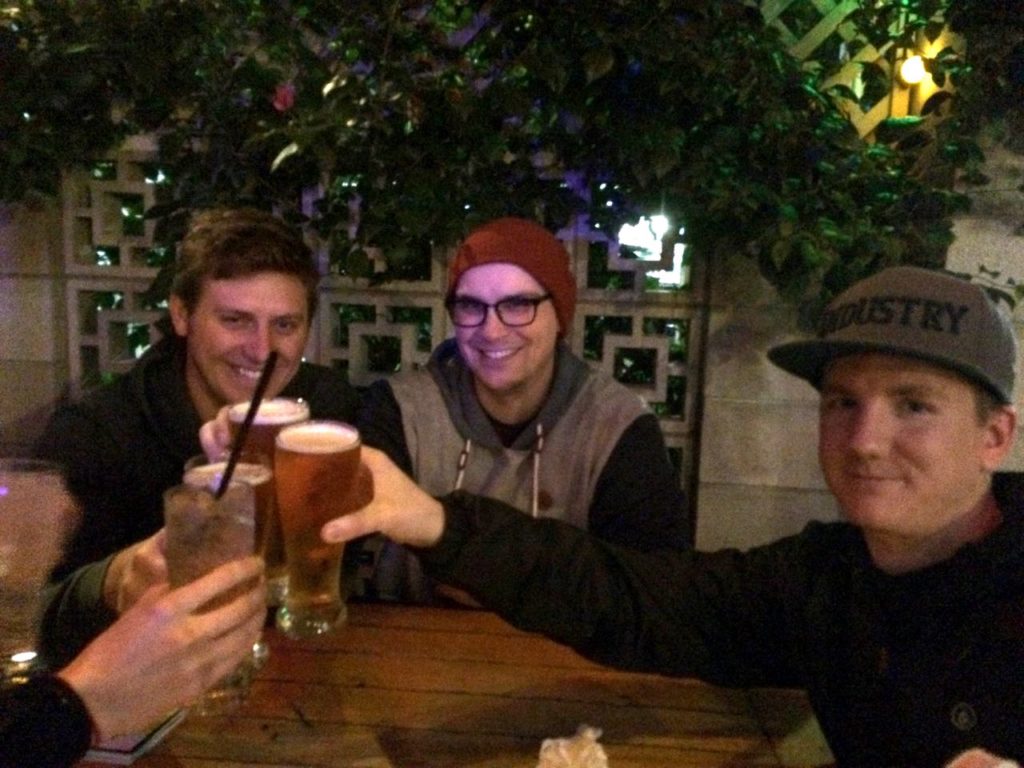 We hadn’t planned much for our first few days as a group of six, as we’d expected our friends would need some time to recover a bit after their flight. It had also been a busy few weeks leading up to their departure- with weddings, school ending and out-of-town work filling Jamie and Michelle’s days.

To everyone’s surprise the new Canadian additions fell right into kiwi time, and it didn’t take much to start our planning. We had expected to stay close to home for a good few days, but all it took was a lazy day in Papamoa and one exceedingly rainy one to get us all motivated to be on the move.

We were eager to show the Kotlewski’s the Bay of Plenty area, starting with a clear morning on our beach. 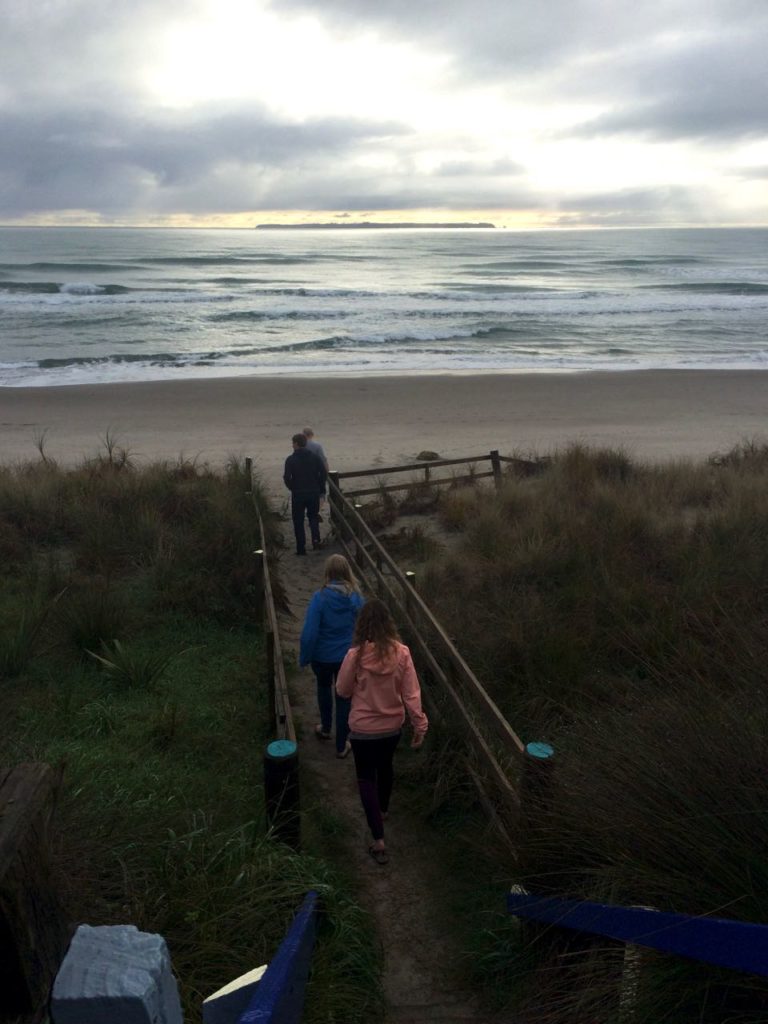 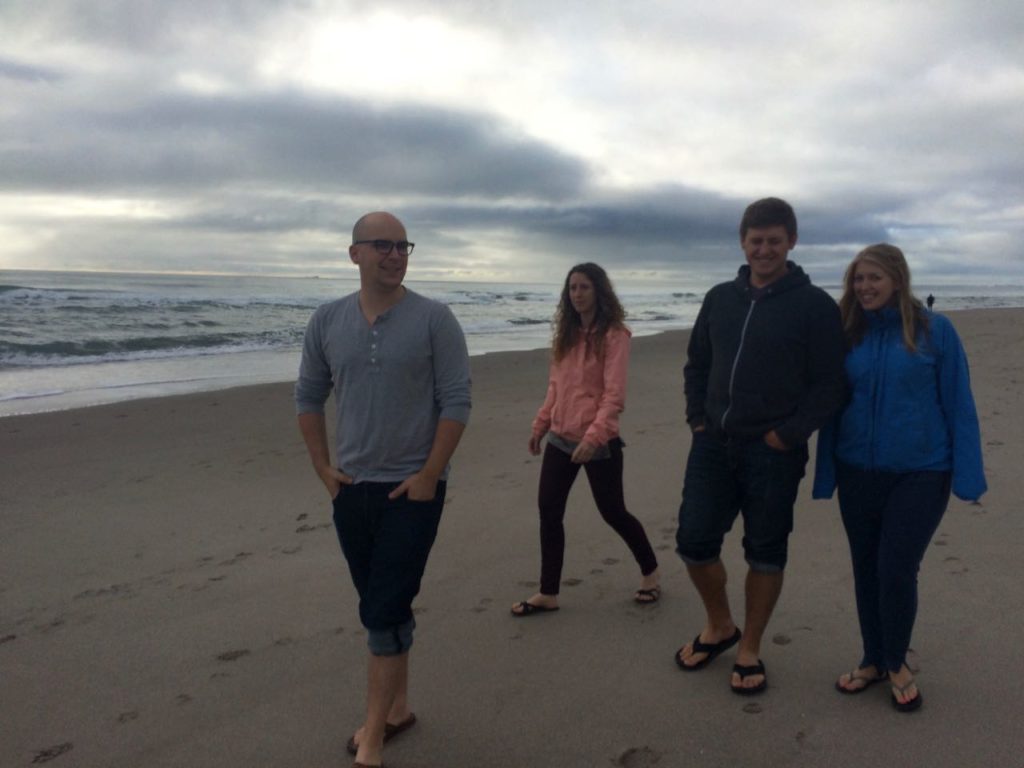 As we walked, the clouds cleared and opened to allow the sun to warm us.

We’ve learned New Zealand winters are about half and half rainy days to warm ones, often raining for a few days and then a swapping for a few of sun. Jamie and Michelle really got some fantastic weather on their trip, though- more sun than rain, and we took advantage of that!

After one day of a full-on downpour, we were ready to wander once more. Our wandering took us to the imagination of Peter Jackson…but more on that shortly.

Our adventures close to home included a trip to Pak n Save for all the kiwi favourites (resulting in Jamie purchasing and consumption of a frightening amount of heavy, full-fat dairy products), an introduction to Henry & Ted as well as a stop at the Bayfair mall.

Tauranga Thursday was a chance for Stacey and I to show Jamie and Michelle the ‘big city’ nearby while Joel and Brandon had a quiet afternoon to catchup on some work. We sought out some fishing and camping stores for Jamie and a (unimpressive) yarn shop for Michelle.

Michelle, Stacey and I had high tea at a hotel that overlooks the water, while Jamie walked around the strand in Tauranga’s CBD. He was able to get a coffee and chat with some fisherman for the down-low in the area. We really enjoyed our quiet visit with delightful treats (thanks, Stace for the photos :). 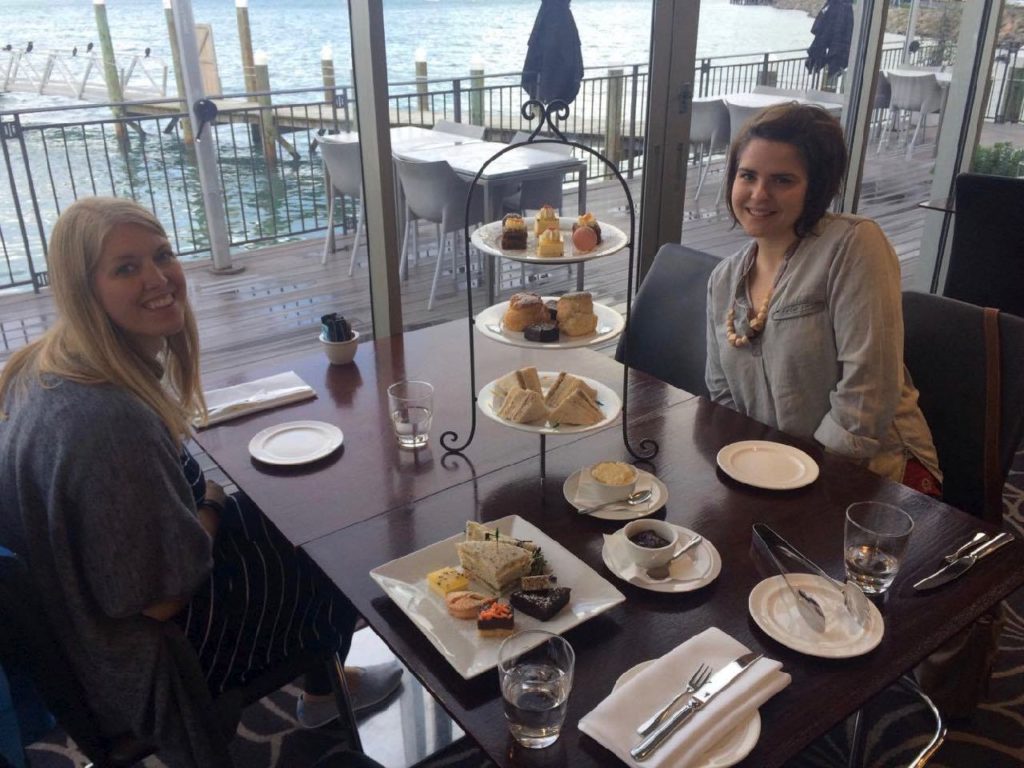 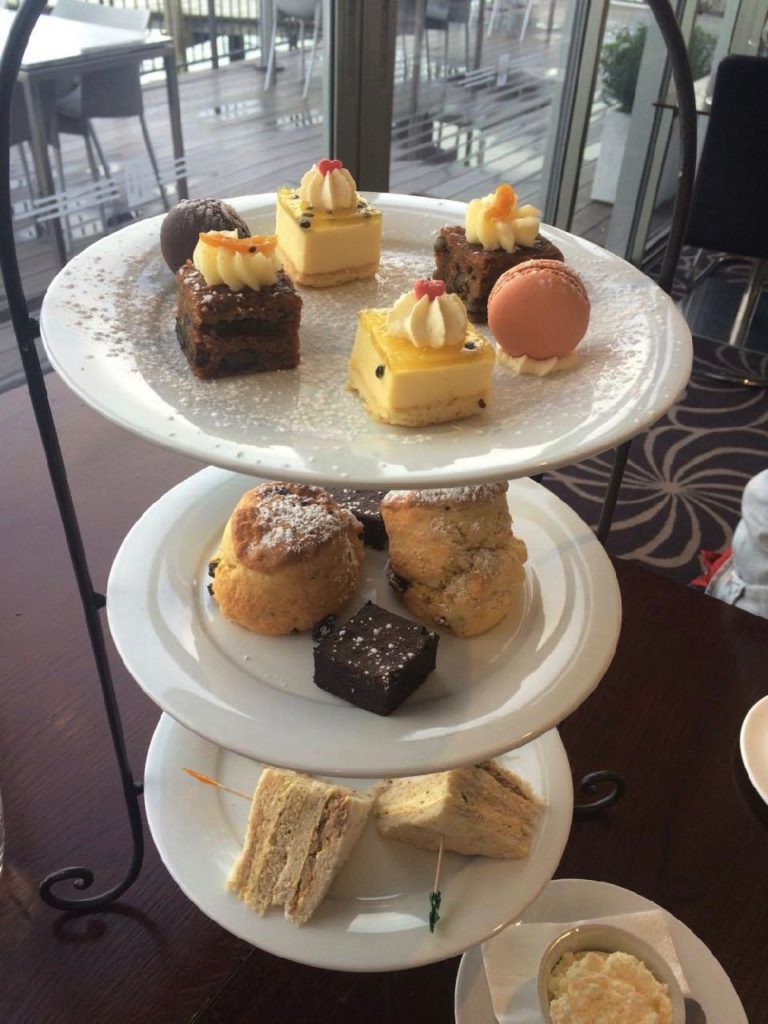 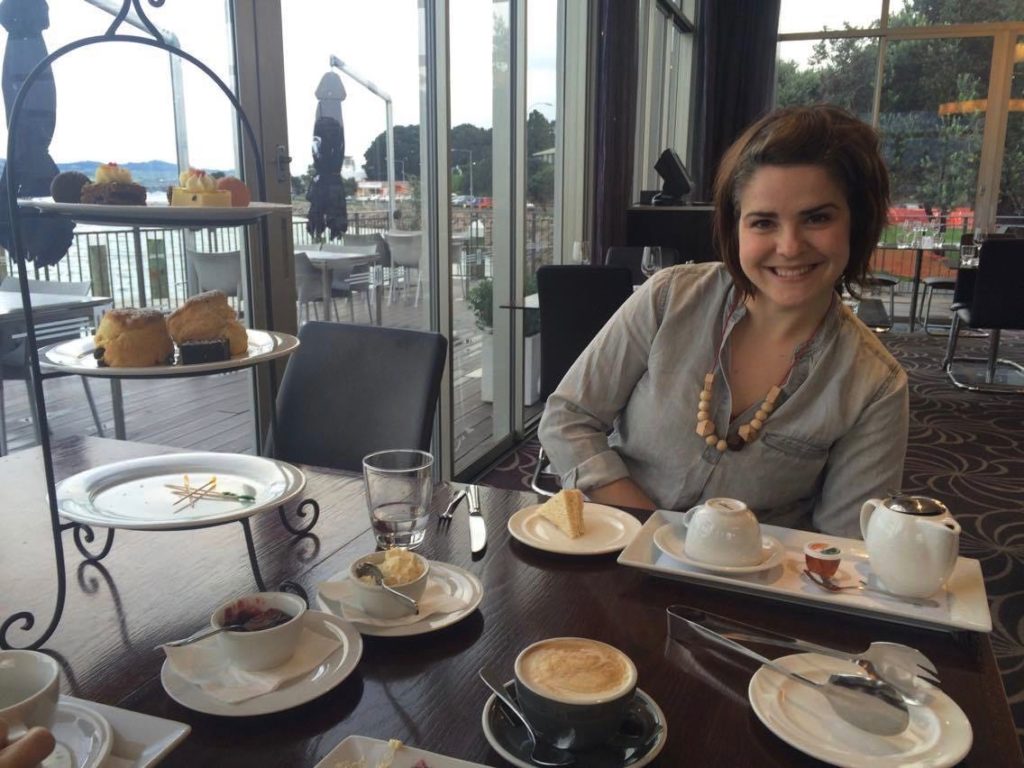 Once Brandon and Joel had finished some of their work, they hopped on the bus and met us for some fun. With the weather still a bit irritable, we decided indoor activities were our friends. We hit the bowling alley for a bumpin’ evening. We also ran into our pastor friend who let us know we had arrived just too early to get the evening bowling deals- bummer! We will be sure to catch the deal another night soon, though (never fear, bargain-hunters). 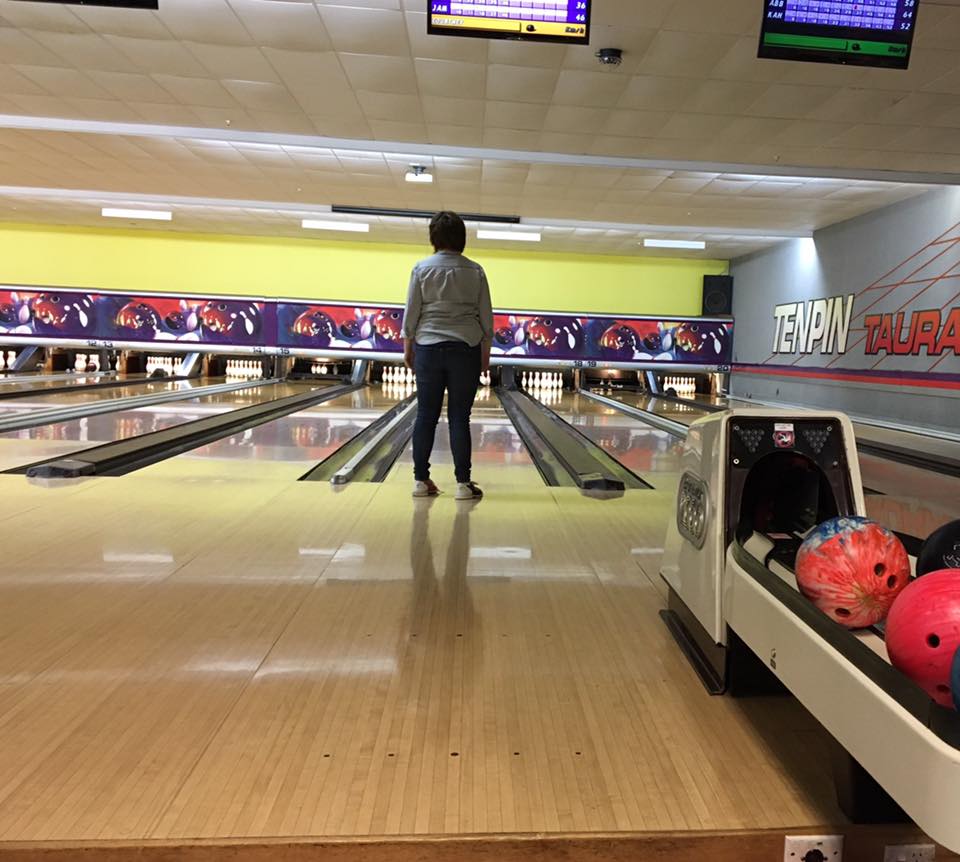 After two games and an awkward encounter with a group of kiwi bowlers, we were off for an Indian feast for dinner. Despite our underwhelmed waiter, we thoroughly enjoyed the meal, sharing some old favourites as well as a few new-to-us menu items. 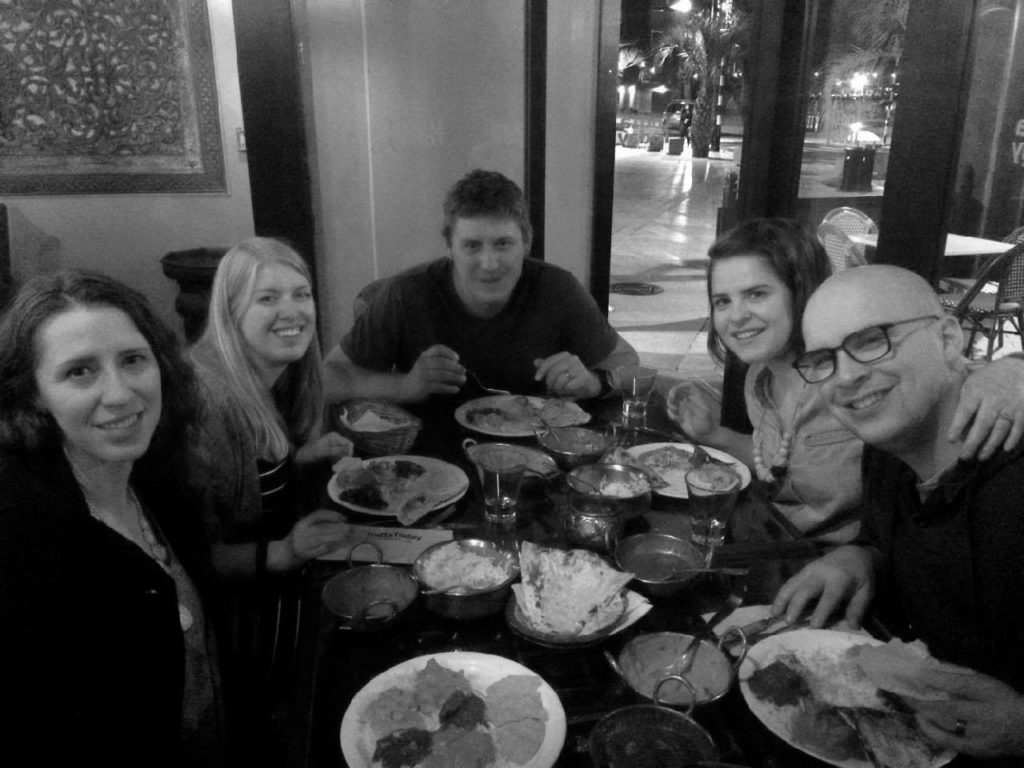 Friday was our Hobbiton adventure! We live just an hour from the start-point of the Hobbit hole tour, we hadn’t yet been and had saved it for visitors (knowing we’ll likely end up visiting a couple times in our eight months stretch).

Admittedly, I’ve seen all the Lord of the Rings movies as well as the Hobbit films, but it just didn’t really stick with me. Fantasy stuff, for some reason just doesn’t really make sense to me. The Hobbit movies I was into a bit more…but anyways. I didn’t know how I would feel about visiting this grand New Zealand attraction, but figured a day outside in the sun with friends, learning about movie magic would be pretty fun. I wasn’t disappointed! 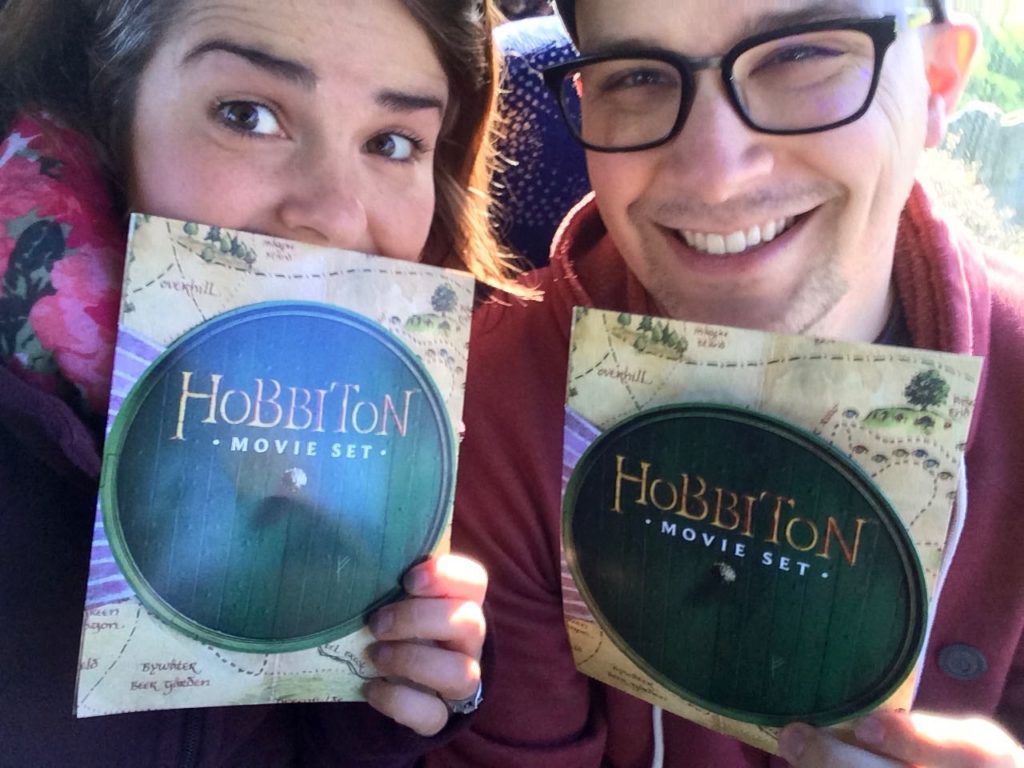 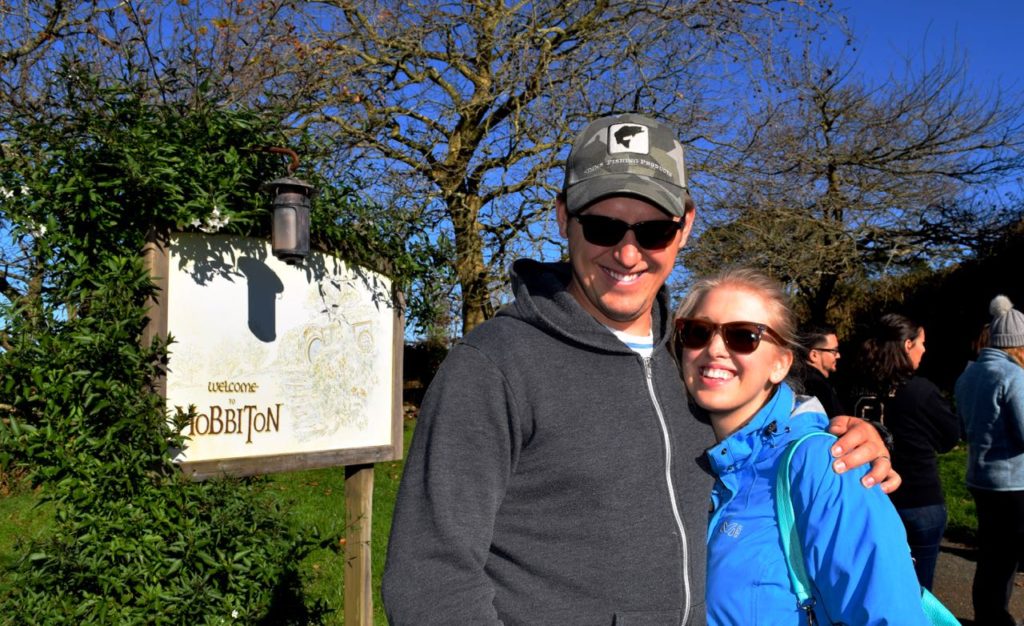 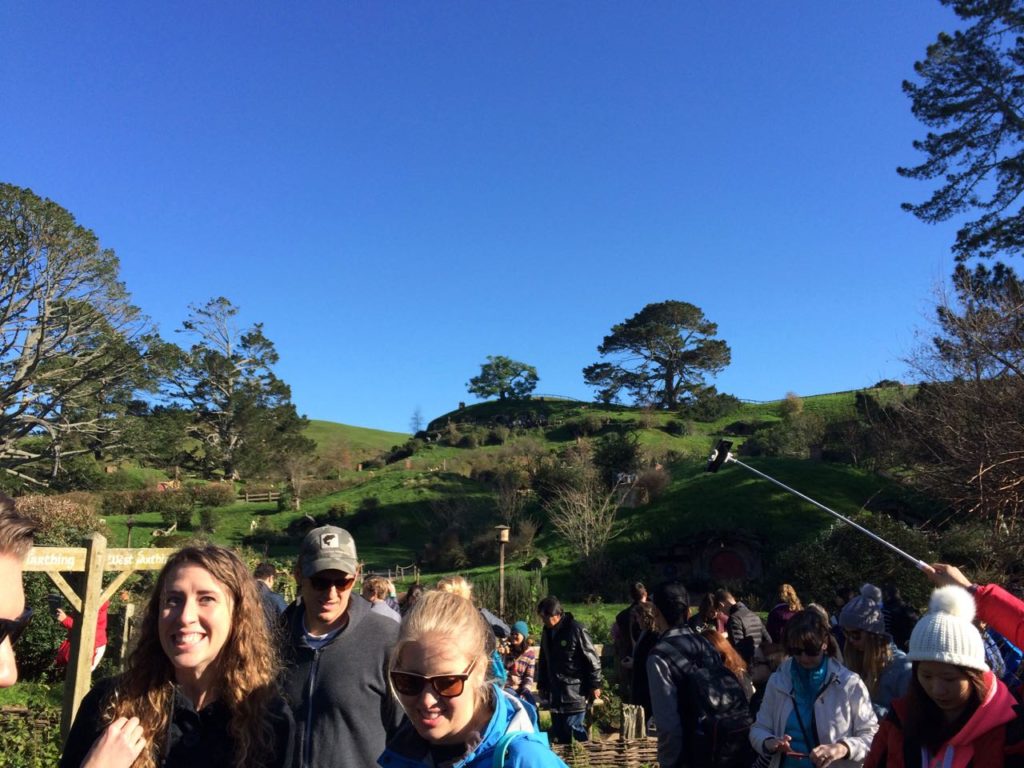 We were toured through the New Zealand countryside along with hundreds of other Hobbit-fans. Our tour-guide was knowledgable and fun. Our guide shared lots of interesting facts about production and kept us all tied to what she had to say. 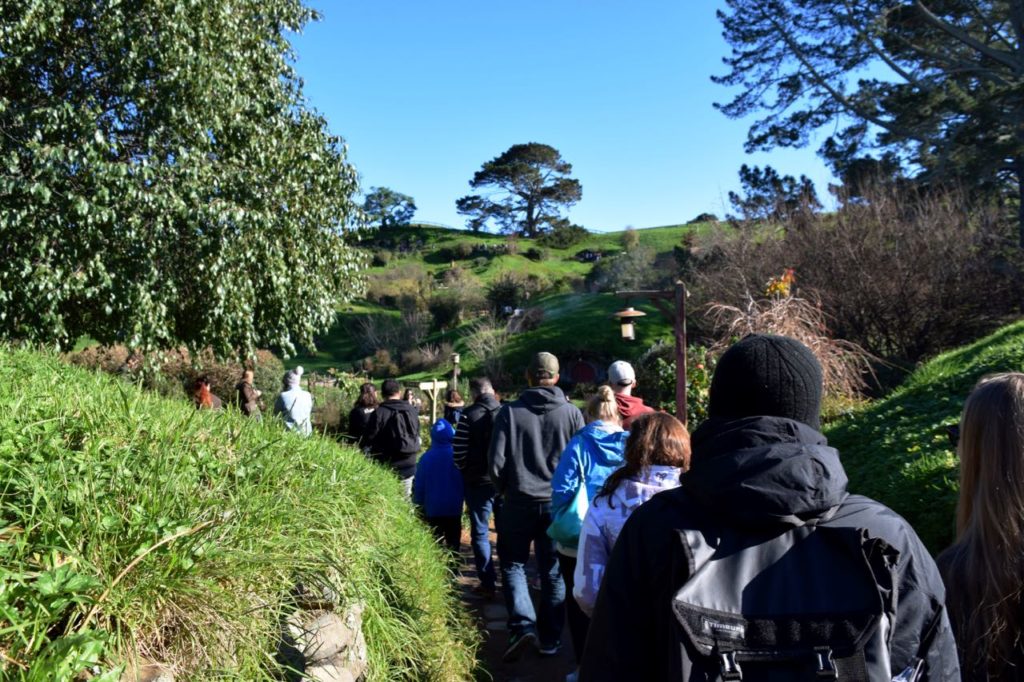 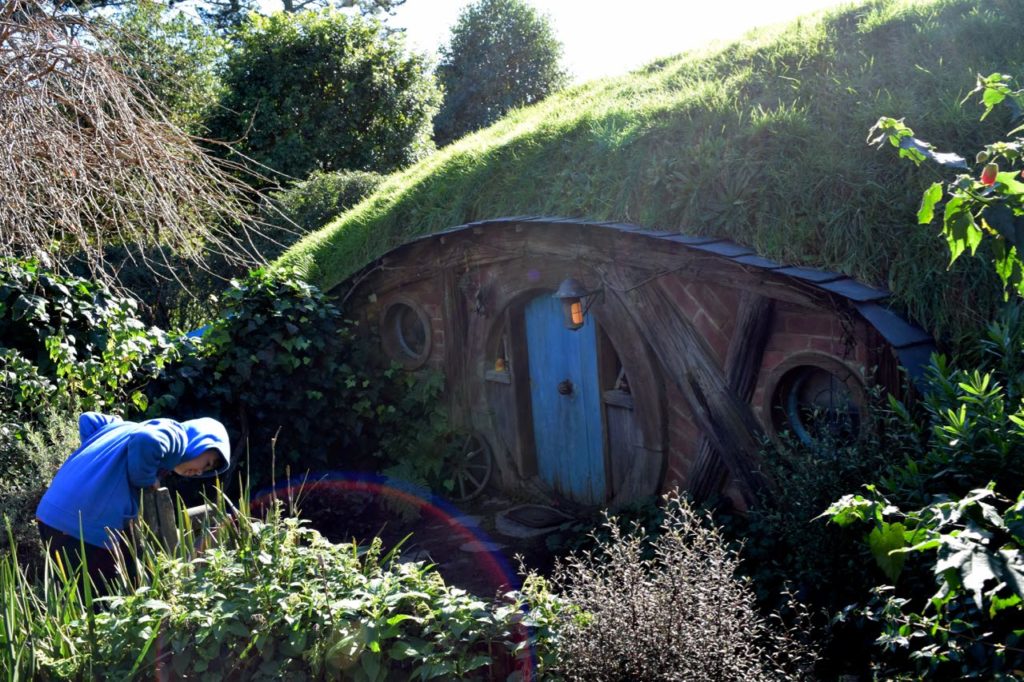 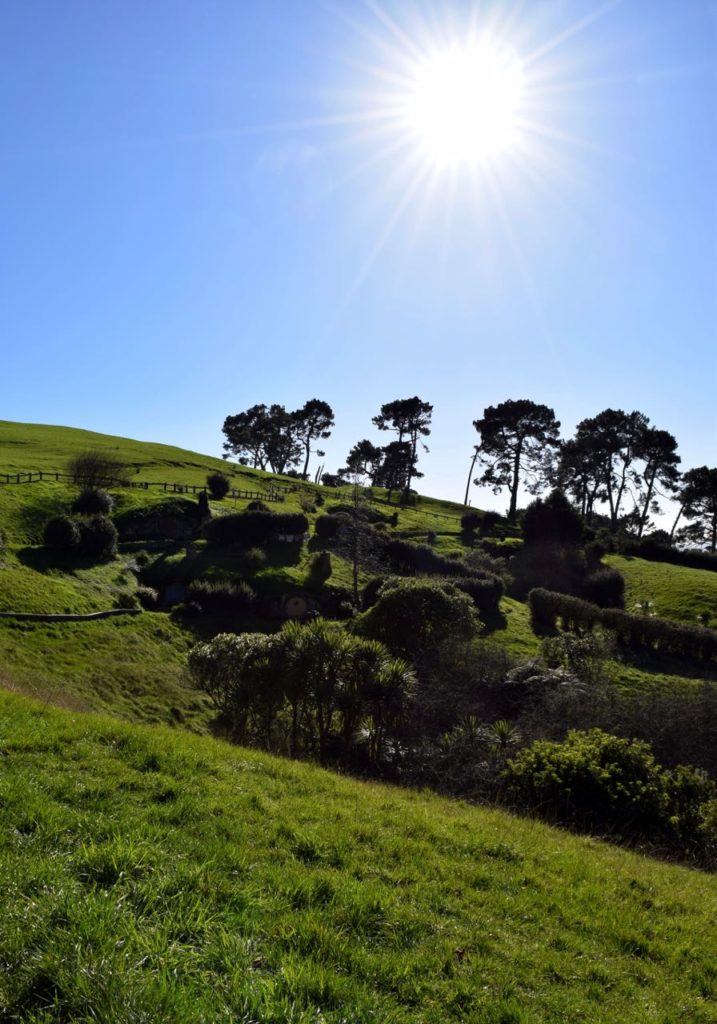 I loved hearing little movie tidbits like: the one fake tree on set was put up above Bilbo’s house because it was set so many years before LOTR and needed to be smaller than the tree seen in those movies. Its leaves were also re-coloured to suit Peter Jackson’s vision for the film.

I also would have been after the job that required the employee to walk from one hobbit clothesline to the next during the two weeks of filming to make believably trodden trails on the hillside. Also, this movie set is just plain impressive.

I especially enjoyed seeing all my travel-mates come alive with child-like joy as we wandered through this fairytale land come-to-life. 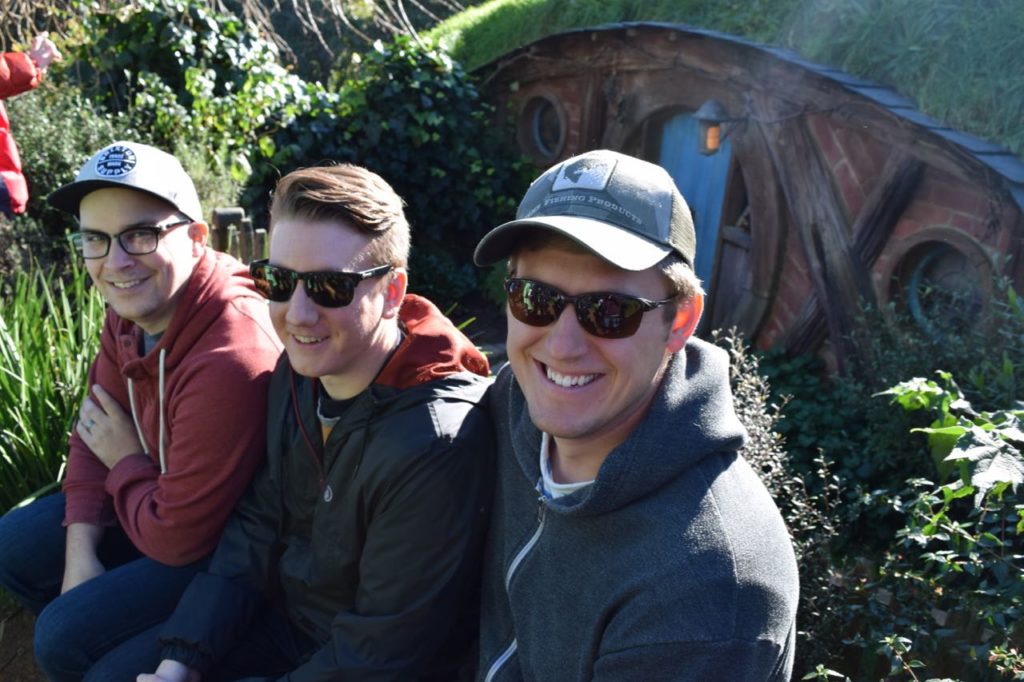 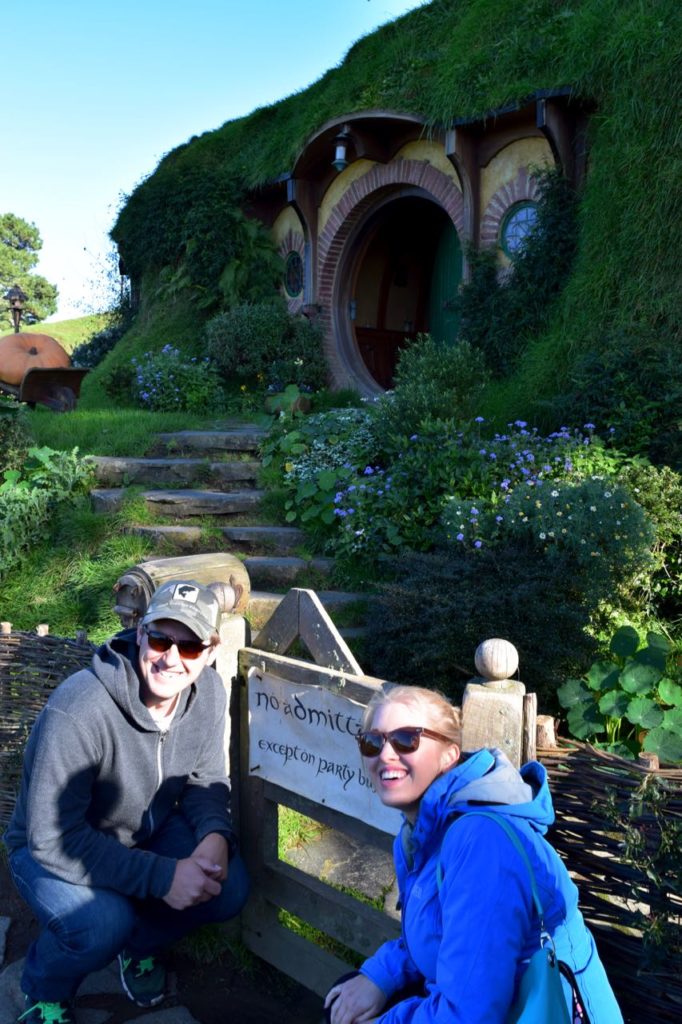 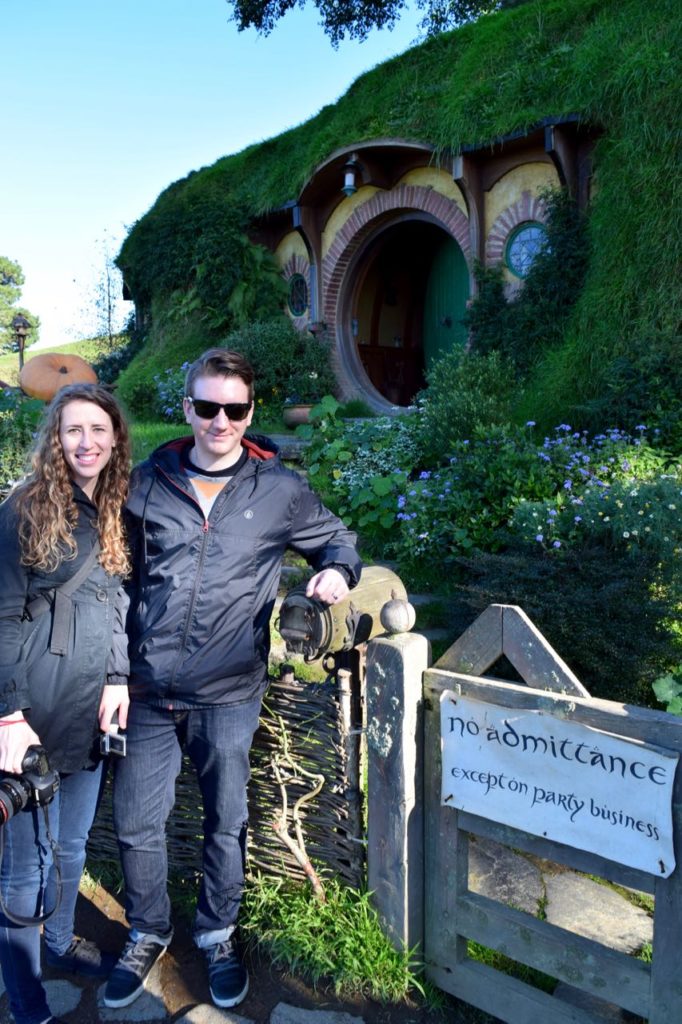 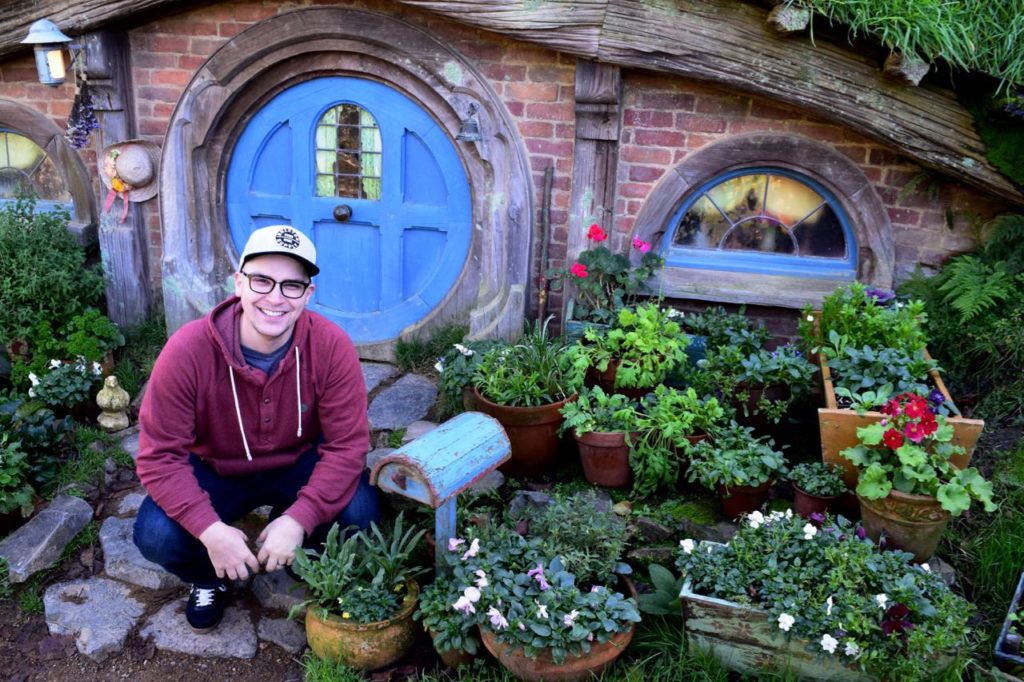 We even found Bilbo’s truck!! It was out of service during filming, but it was nice to know it’s functional once more 😛 (picture 2 also shows the fake tree- the sun is shining through it’s branches). 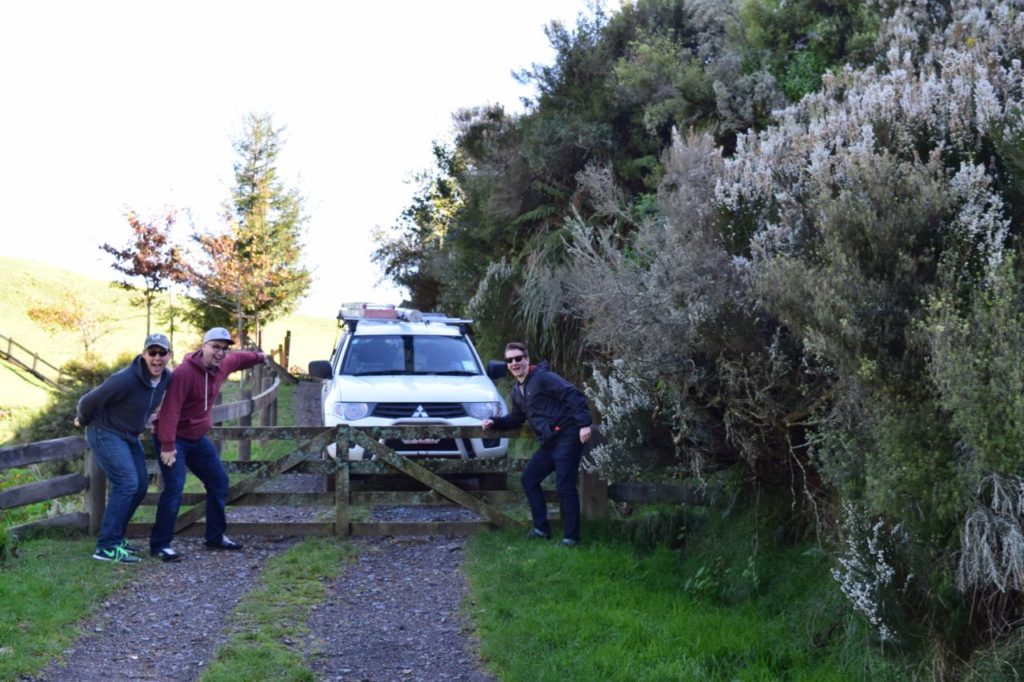 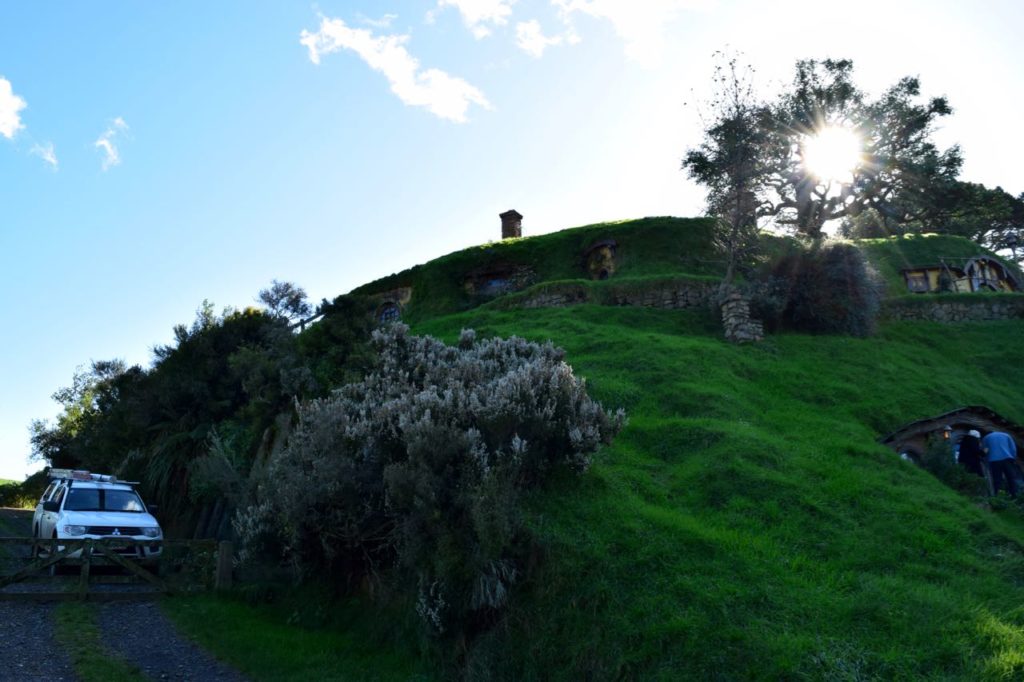 We enjoyed some beverages offered on the tour at the Green Dragon, and only available in Hobbiton (special, secret recipes and all that). 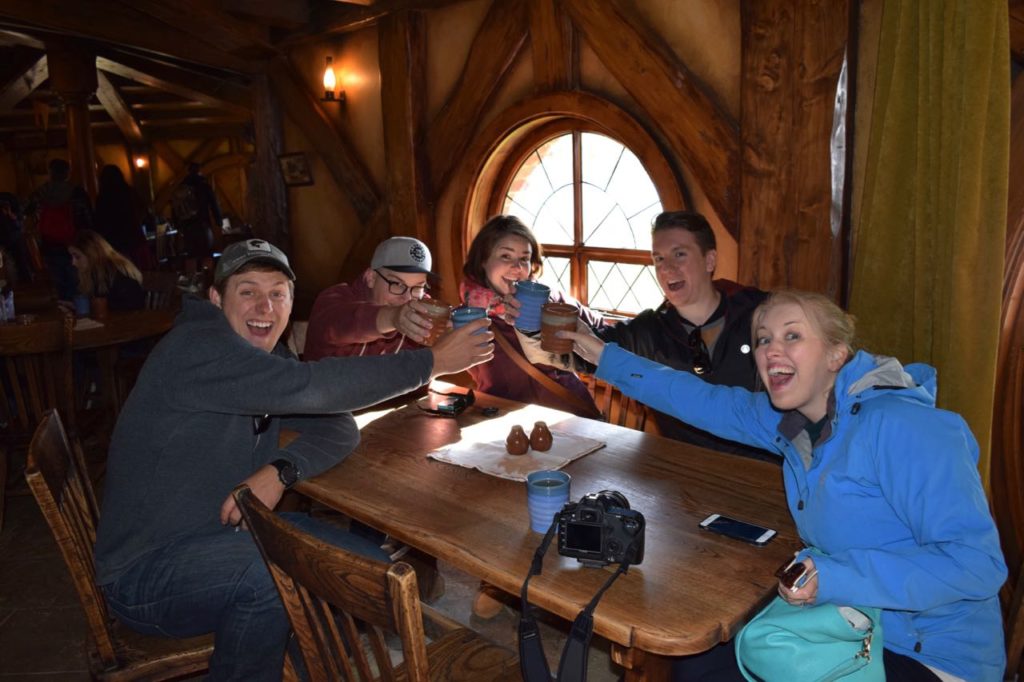 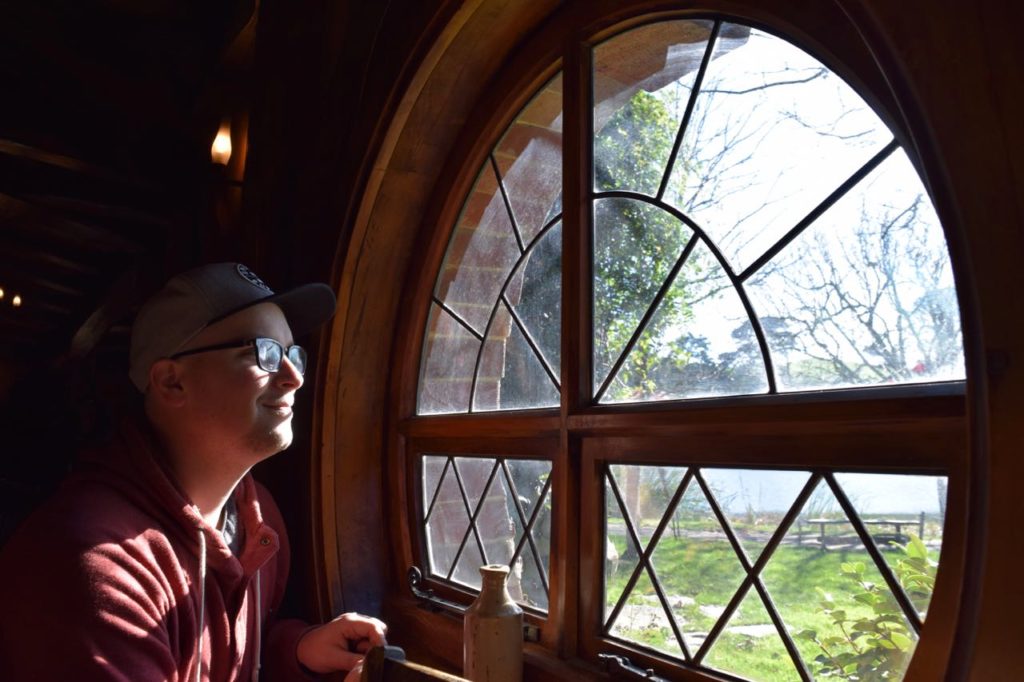 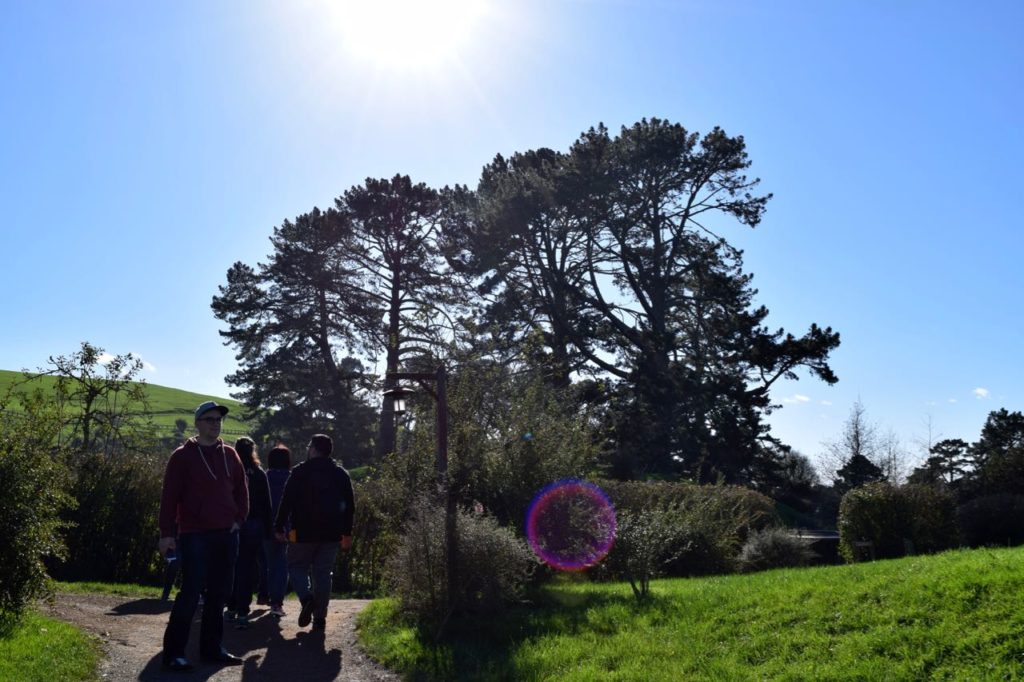 We had a lovely time in the land of lovely little people and ended up rounding off our day with lunch in Rotorua and Jamie’s first fly fishing experience on Lake Rotorua.

The day before our road trip up and around Northland was spent highlighting Mount Maunganui. We had another beautiful sunny day to enjoy together. First step to enjoying the day is fighting hanger! Breakfast of champions: streaky bacon (kiwi for the bacon we have in Canada), apple pancakes and an egg scramble. Delicious! 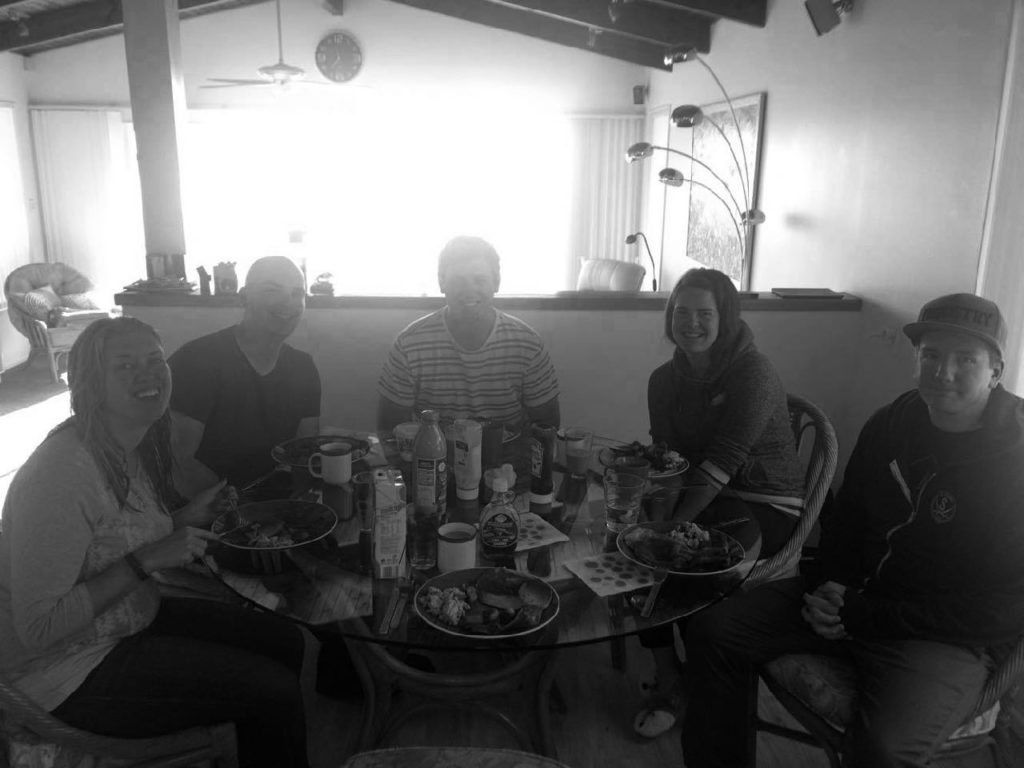 Joel was working on a deadline, so we left him to finish up while the rest of us headed to Little Big Market at The Mount. Our one free Saturday was the one Saturday this month when the Market is on, so that was a treat.

We wandered the stalls, had some coffee and the Kotlewski’s had their first taste of Johney’s Dumpling House (a favourite of ours). Stacey has caught some great moments for us, and I’m so glad for all the photos I’ve been able to share of hers on this post! 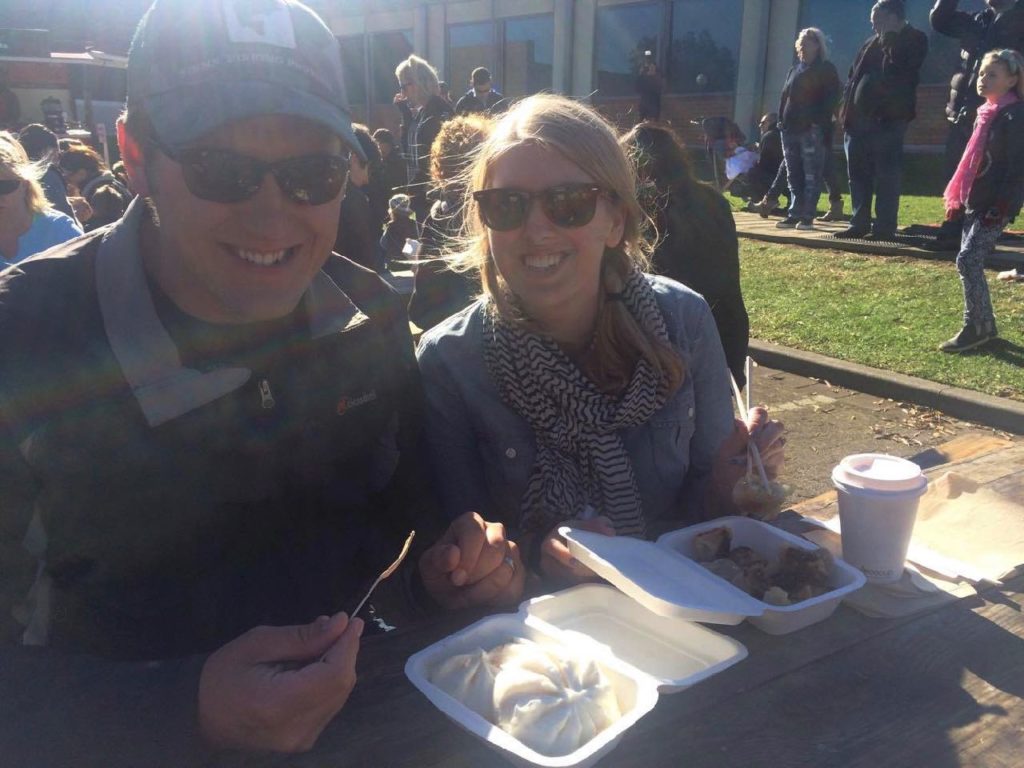 Once we were done at the market we headed to the Mount itself for a little hike. We tried a new route to the summit and spent the extra time walking around the base as well. We were able to help Michelle get her 15000 fitbit steps 🙂 What a perfectly beautiful day, too.

It’s been fun having the Mount so close by. We’ve hike up and around it in a few ways already, and have more yet to explore. Hiking with friends on that Saturday even allowed us to see a helicopter running some sort of drills from one side of the slops to the other. Kind of a cool thing to take in! 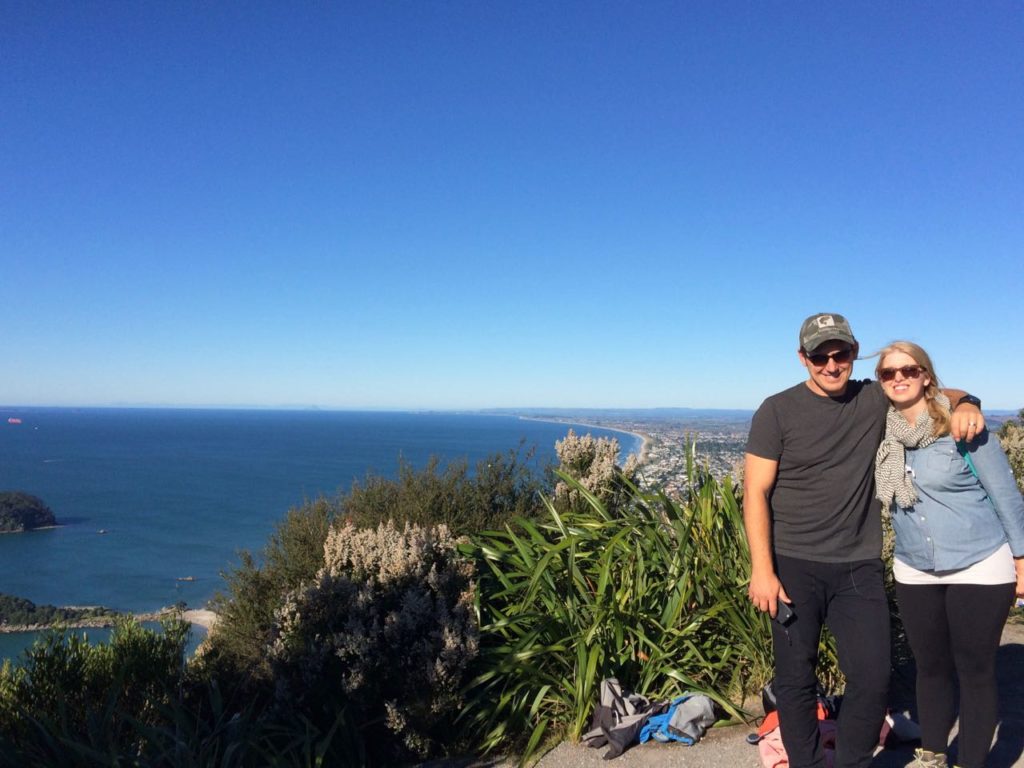 After our hike, Joel joined us via bus and we all had a nice pub supper before resting up for our Sunday road trip departure…that adventure is another post, though.