Tomorrow marks the one month anniversary of being New Zealanders (which is insane). It seems like only yesterday we were figuring out how to make our dream a reality. We have learned a lot about being in the country, and we have many more things yet to discover.

We’ve learned you can pay for your library DVD rentals anytime, not just when you check them out. The library kiosks are a bit fussy, too- but I am a proud Tauranga Library card holder! 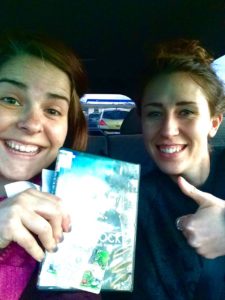 We’ve discovered the importance of all present parties having their passports at Pak n’ Save if beer or wine is purchased. We have been grateful to know you can, in fact, buy ketchup here, but most often at restaurants you get ‘tomato sauce’.

We now know where to purchase firewood, and that our beach is one that can host fires (even if all the gross sand bugs are drawn to the flame). We’ve been educated in many critter-related prevention plans (robo cockroach repellant cans, sandfly oil, mouse traps, etc.)

We’ve learned that Kiwis are people, fruit and birds and that the people have several similarities to us Canadians, eh. 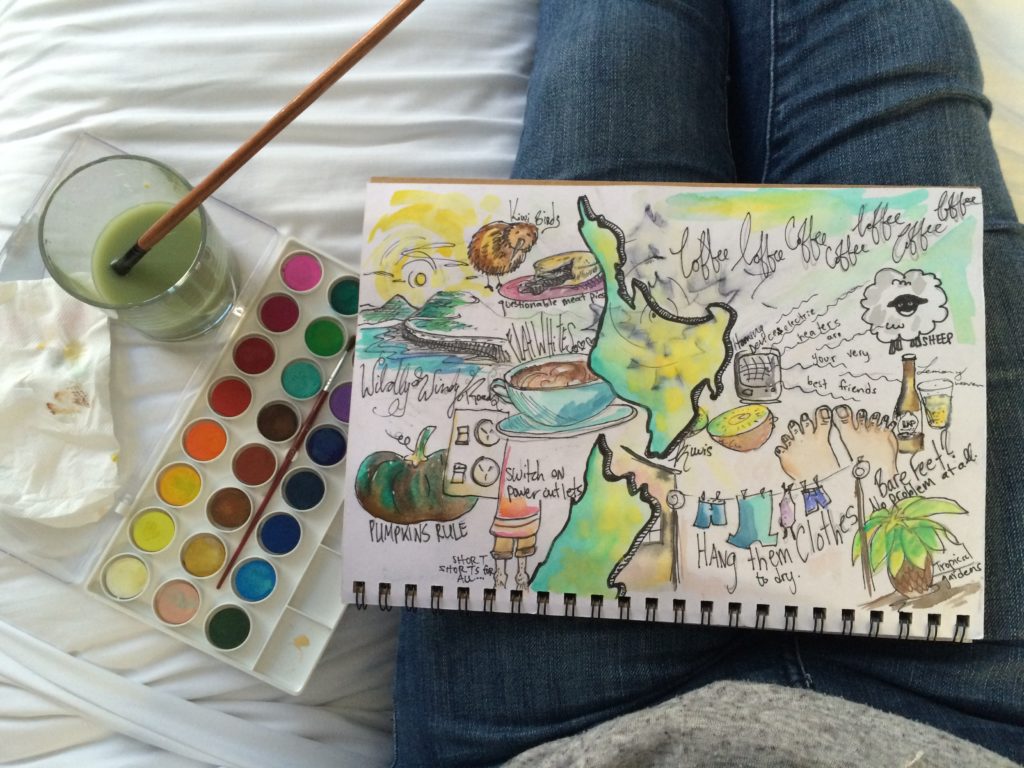 As I’m thinking more on our lessons, I’m realizing recalling them all could easily be a full blog-post in itself! We are slowly finding our place here, but one big thing I learned this week is that the Bay of Plenty is already a suitable replacement for home.

Falling in Love with the Bay of Plenty (BOP)

The Bay of Plenty is a large segment of the NorthEastern part of the North Island of New Zealand, and includes a couple of good-sized cities. We have everything we might need within an hours drive, really- 2 airports are within that drive time as well.

Papamoa is where our place is, and it seems to be a fairly sleepy community (in the cooler months anyway). There are two grocery stores that are open until 10pm, a couple of pubs who kind of decide when they’ll be open until each day and a McDonald’s drive thru open 24-7 (but only serves coffee until maybe 8pm).  It’s a quiet spot that mainly consists of retirees and young families this time of year.

On a sunny day you’ll see loads of people out walking their dogs and/or babies. Two Sundays a month there’s a farmer’s market hosted just outside the recreation centre, and there are a handful of fairly-busy coffee shops close by. Our local favourite is ‘Henry & Ted’, which is about a 5 minutes walk from our house. 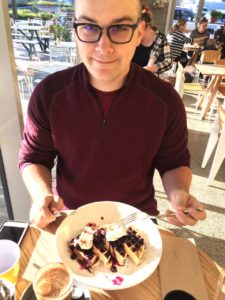 The population being as it is, there seems to be a good number of people to support fun things like garden centres and gift shops.

Stacey and I went to one such stop last week to enjoy the sunshine. We drove to the outskirts of town to Pacifica Home & Garden Store, and were greeted by a bustling cafe and well-cared for gift and greenery areas. Seniors gathered to swap stories, while tiny humans with the cutest knitted toques toddled in between cafe tables and sunbeams.

It was great to be reminded that people live in our town! We enjoyed coffee, a time to journal and sketch and ended up going home with a few starter plants for our yard. 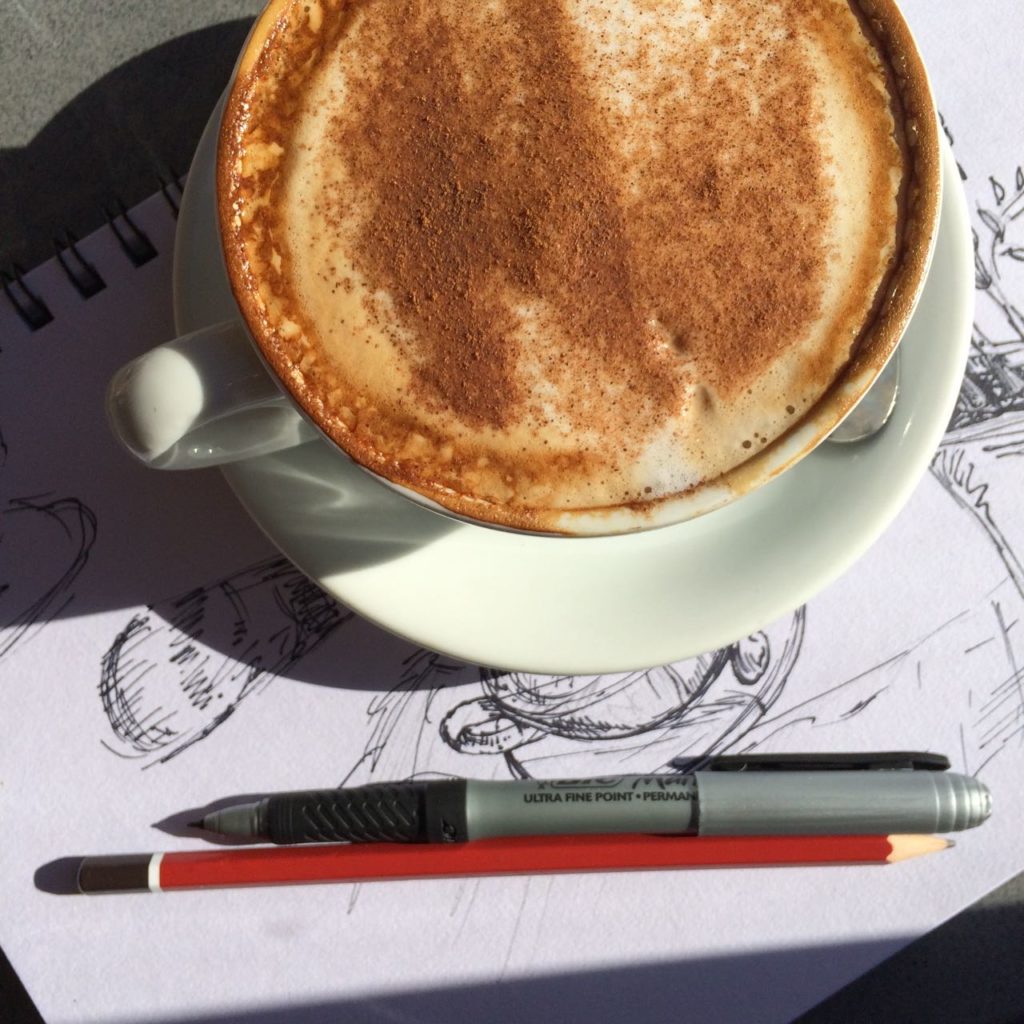 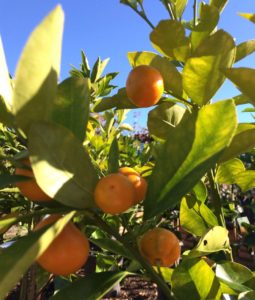 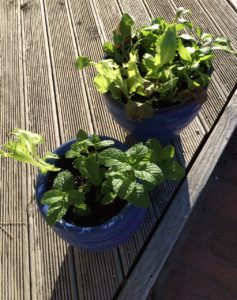 Not far from our little town are a couple busier municipalities. Tauranga is the ‘big city’, there’s a pretty big city centre here, lots of shops, restaurants, a big library and much more industry. too. We are beginning to reach out into the city more.

We’ve visited 2 churches now situated in that area.  One Sunday, I mis-read a church website and showed up as everyone was leaving. SO, we made the best of our day and headed to the Waikareao Estuary down the street. This is a huge expanse of boardwalk and pathways that stretch across parks and marshland. Pretty cool! 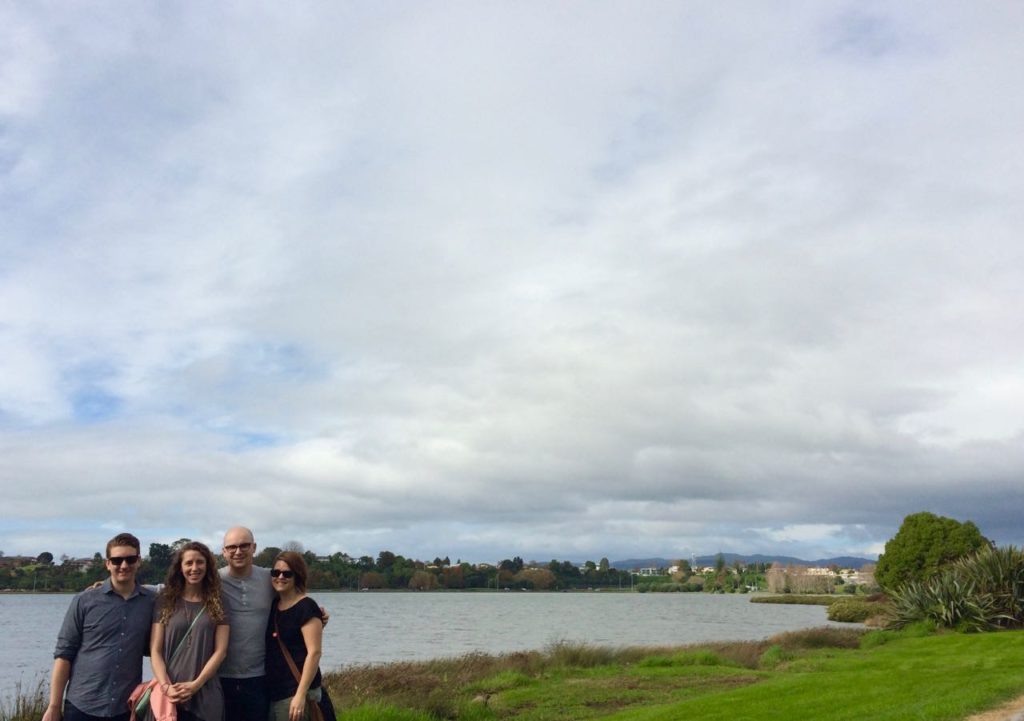 We have also tried a few restaurants and cafes in the city. One such coffee shop roasts beans and supplies to several other shops in the Bay of Plenty. Downtown has a handful of quaint stops like Elizabeth Cafe and Larder where Joel and I trialled their fab little cupcakes! 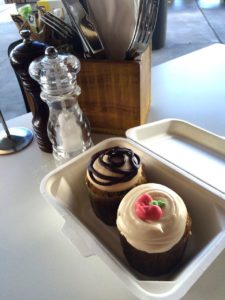 Closer to the waterfront, there’s a trail of shops and restaurants known as ‘the strand’ where we happily indulged in a Mexican feast one evening.

Mount Maunganui is a regular stop for us. The main stretch has loads of places to eat, great short walks (along the mount or by the water), there are lots of places to explore and it’s only about a 20 minute drive away. This is where the closest movie theatre is as well as a mall with most things we need. A few times a week, we find ourselves there for a multitude of reasons.

Once a month there’s a lovely market that’s held along the main street. We had a lot of fun in the sun, cruising up and down the aisles with coffee in hand. Mt. Maunganui (or ‘The Mount’ as they call it) is also full of young families, and has resulted in a load of really cool local companies that make kids products (blankets, towels, toys, clothes… you name it). With our niece on the way this summer, it was tough to restrain myself from buying her all the cute kiwi things. I want to buy everything!!! 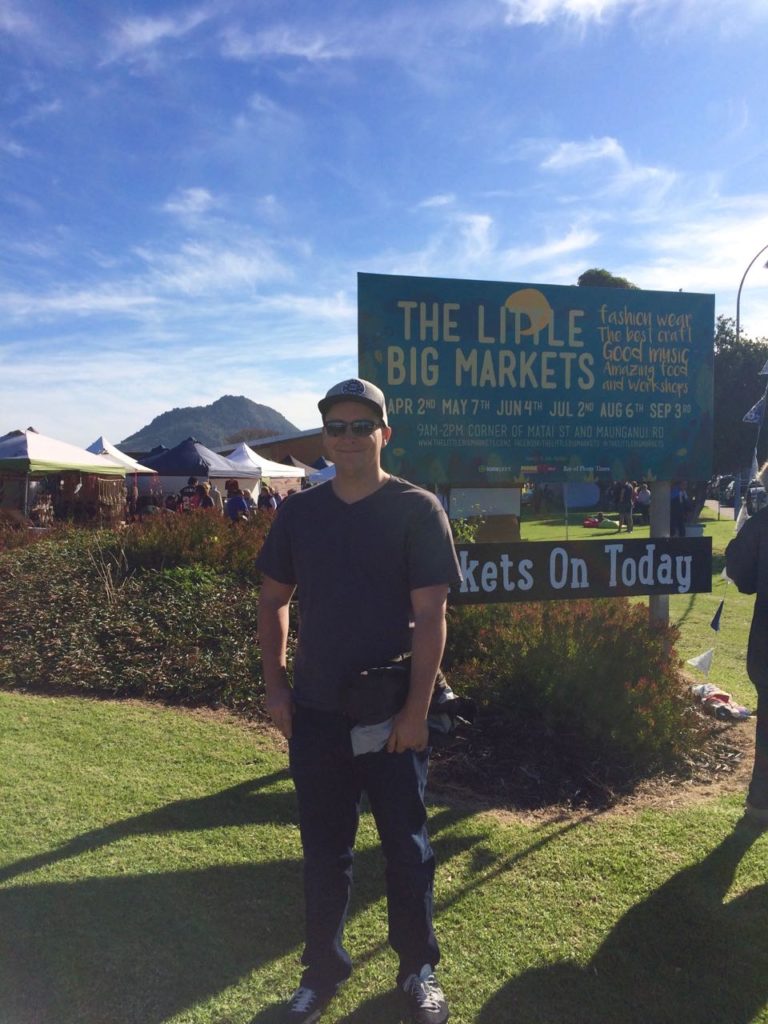 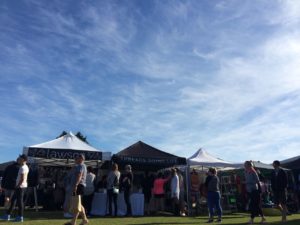 I found the same homemade dumpling vendor that was at the night market in Rotorua, which was really cool. We loved sitting on the warm grass and having a little food-truck picnic lunch! 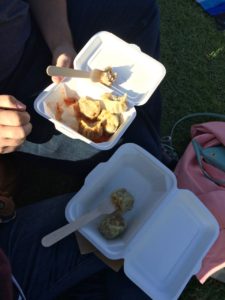 The market is held just one block from the apartment complex Joel’s cousins lived in while they were in NZ for a year. He feels quite sentimental every time we drive by (which is often), and remembers all the good times he had while visiting all those years ago. Here’s a picture: 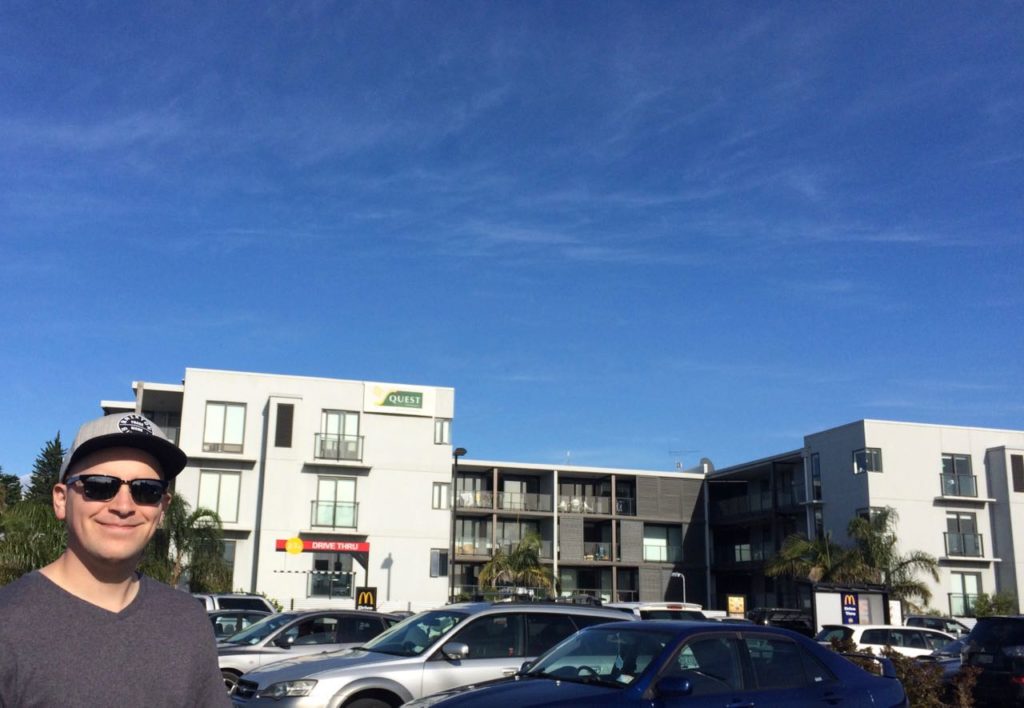 The weather was cooperating with us the other week, and we got loads of sunshine. It’s tough to believe we were in the first week of Winter!

It seems like all we do is eat out, but we do make the majority of our meals at home. One day the sun was irresistibly warming our living room and patio, so we figured it was a good time to have lunch in The Mount. We headed out to grab some fish and chips to enjoy by the ocean. Apart from being on-guard as seagulls threatened to dive-bomb our festivities, we had quite a fantastic afternoon! 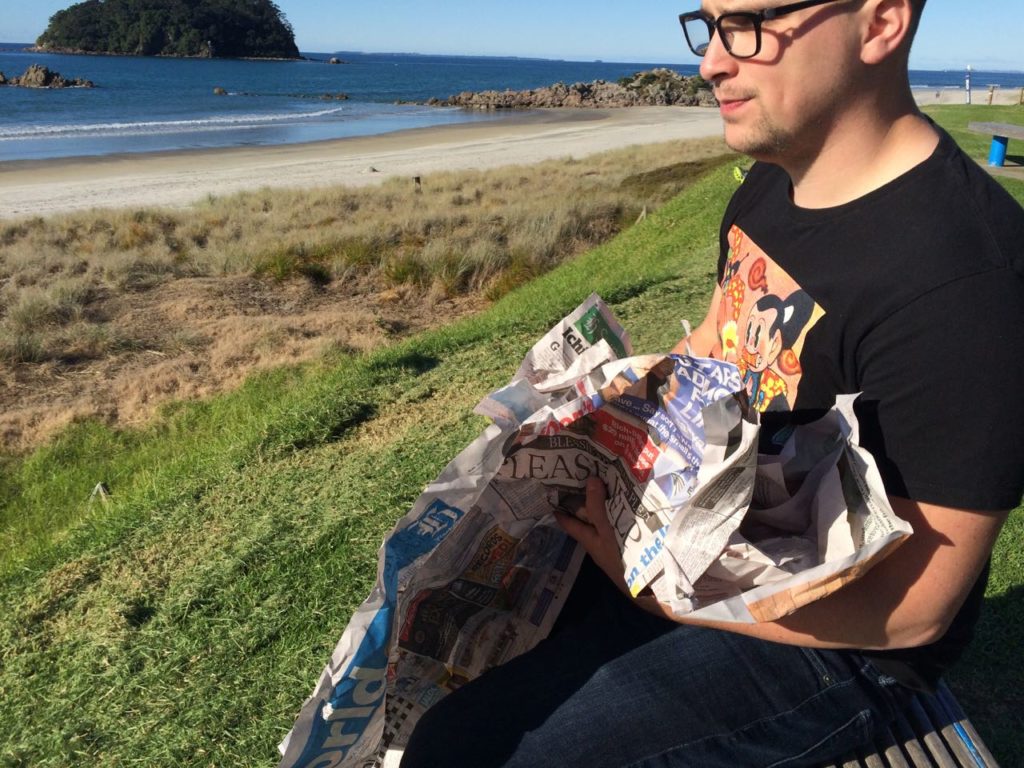 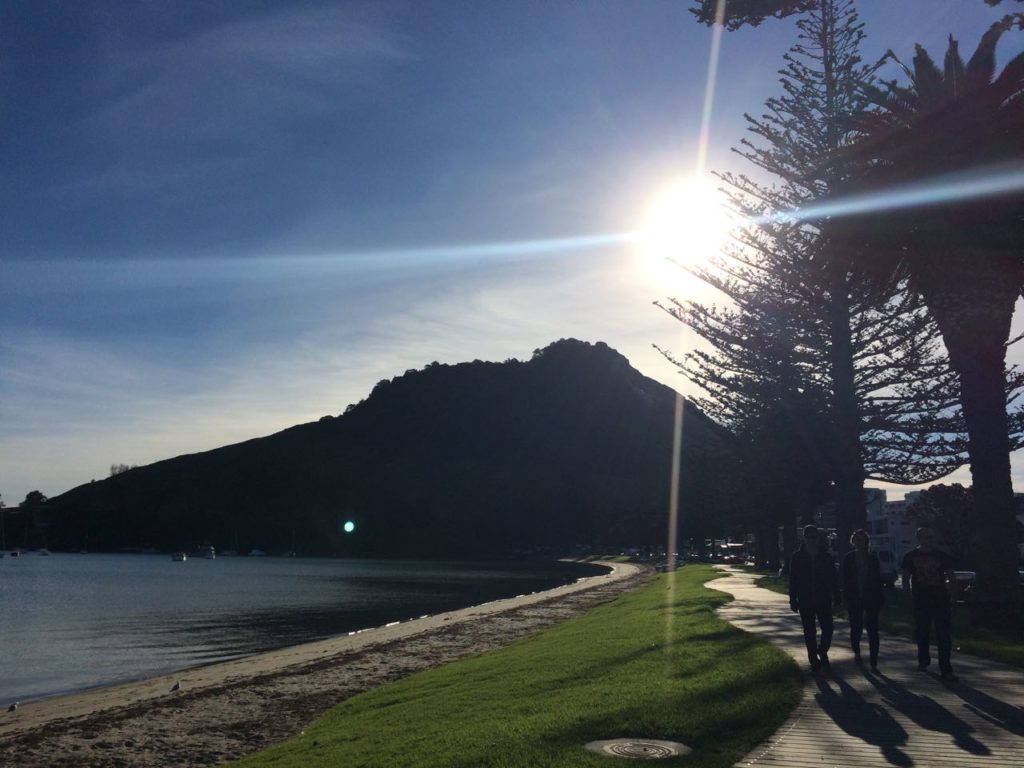 Just before Joel and I headed to Australia for a week, the four of us started to reach out of our area of the BOP to another. I had researched some walks that are near by, and found a really cool hike in Whakatane, about an hour east of us.

We didn’t really know where we were going, but we had a handful of guidelines to follow. In kiwi-infested bush we trekked up and around some beautiful coast lines. We knew part of our journey had to be avoided at high tide, but didn’t really know why based on what we’d read. BUT away we went! 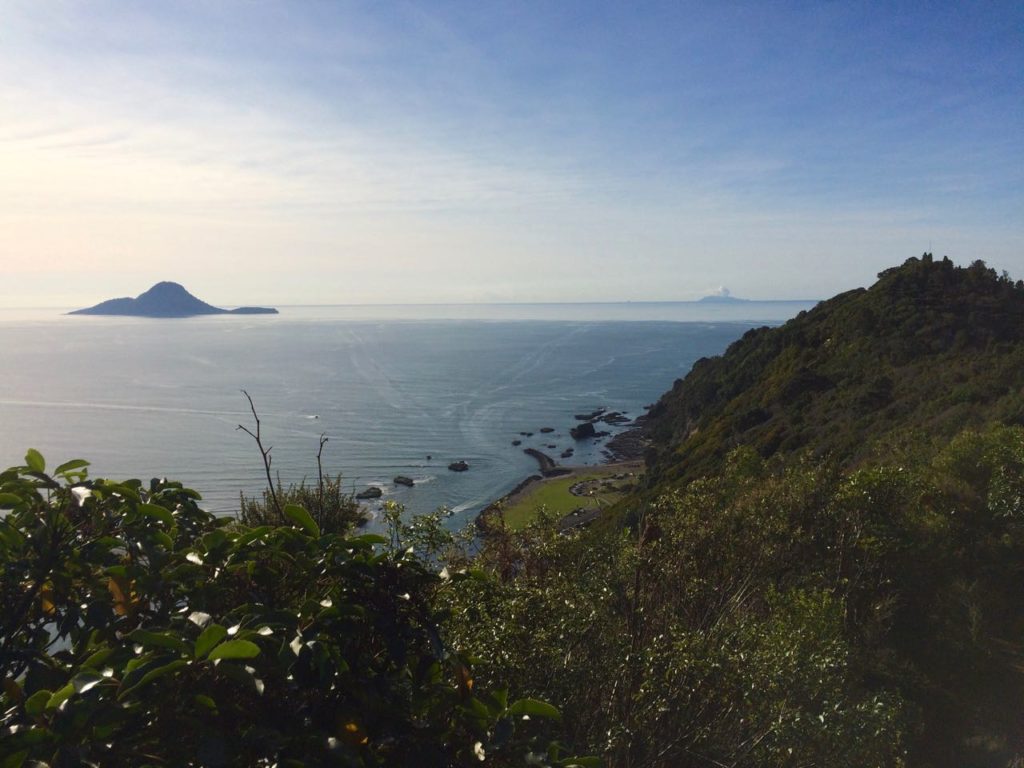 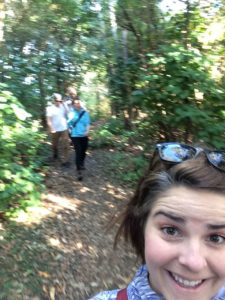 We were not disappointed! There were so many beautiful view-points as we climbed. There were lots of moments where the trail wound through deep greenery and jungle, and then we’d reach huge clearings where you could see 360 degree views from hills to town and off to the ocean.

Our hiking trail took us on a 3 hour+ trip that went from pastures high about the sea to gravel roads and farm land, but about 2 hours in, we discovered the reason we weren’t advised to travel at high tide. 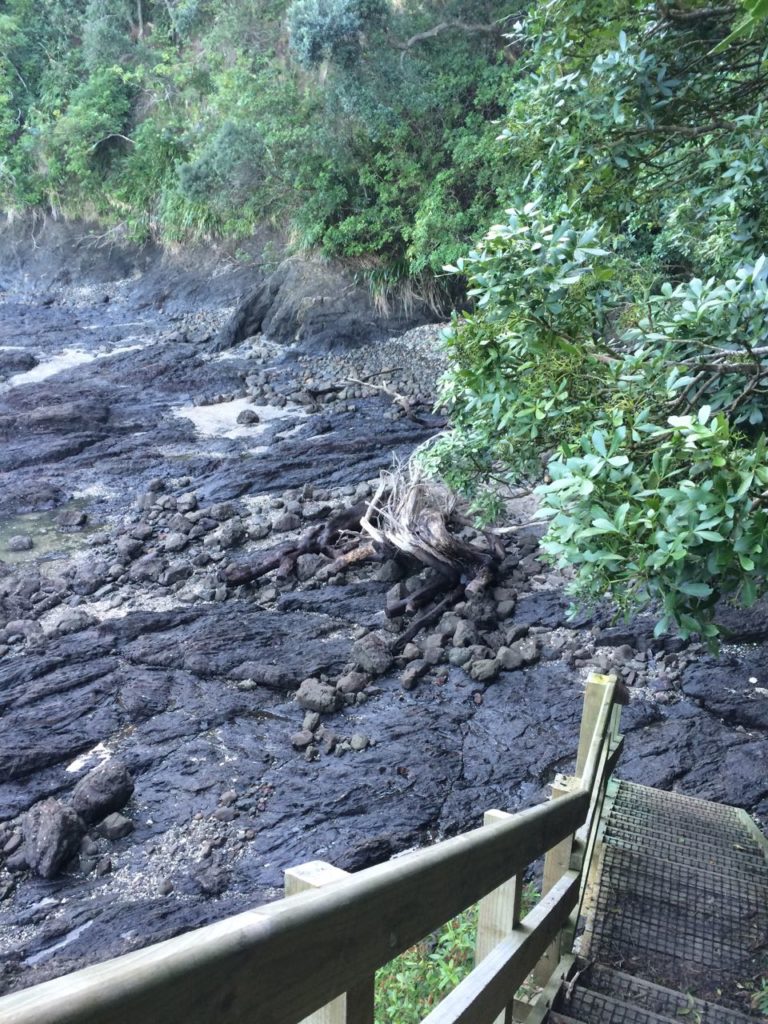 A staircase leads you to a rocky coastline that isn’t always accessible. This was really neat for a crew of Albertan hikers, we were delighted to travel across the expanse of sand and black lava shoreline and take in the beauty. 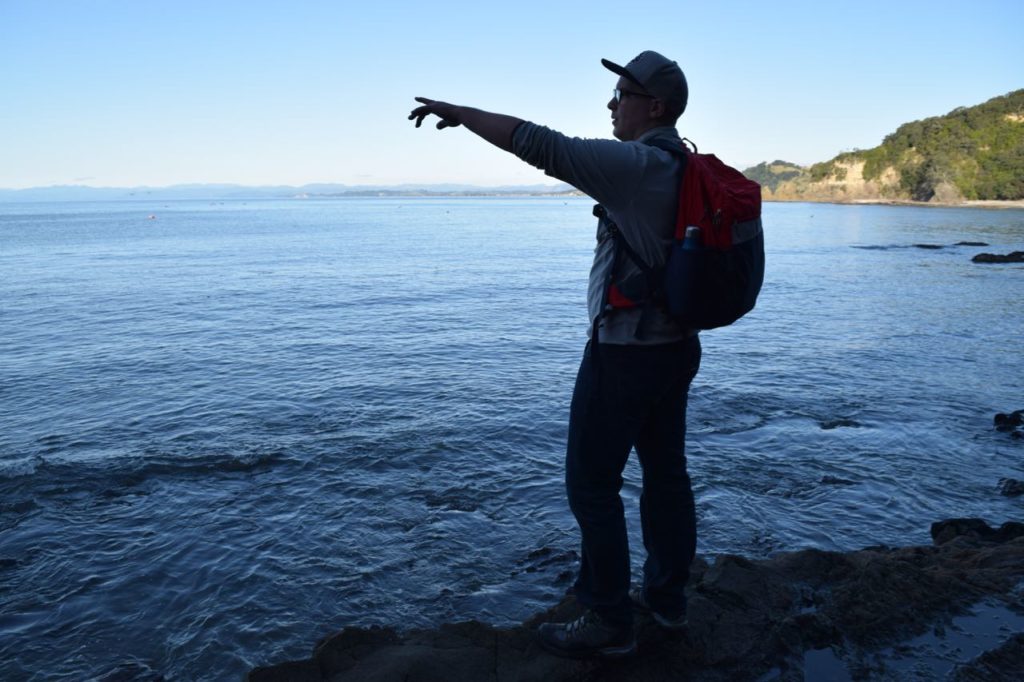 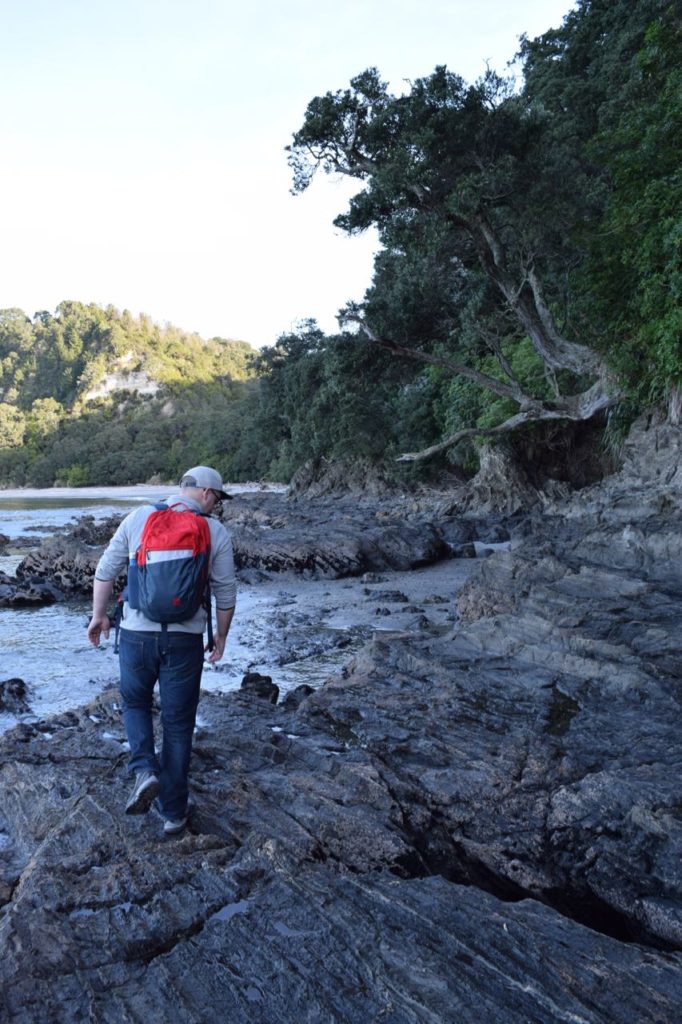 Whakatane is supposed to have a heap of walking and hiking trails all at varying lengths, so we’re sure to visit again.

It constantly amazes me that there is so much to discover in such a tiny country. We have been blessed to have this time away, and are grateful to be adventuring with the best folks.

WELL! Another un-intentionally massive update. So many words to say- we’re loving our new home. Joel and I are in Adelaide, Australia this week, so there’s bound to be another post coming just around the bend. Appreciate all who take the time to check in with us 🙂 so, thanks!

One thought on “Courting BOP”