For some time I’ve had this strange and inexplicable fear of Australia. Even before I was warned by one of my 4-year-old art students with, “Courtney, don’t go to Australia- there are like 6 or 10 things that can kill you there.” I’ve been nervous of the 6-10 (but in reality- like WAY more) creepy crawlies that are harmful/just gross in the land downunda.

In my mind, you just get off the plane and a wall of really weird and disgusting creatures kinda of like… attack you.

Turns out… I was wrong.

Joel had the opportunity to speak and teach at a conference in Adelaide, South Australia, so we planned a trip!

We have the best friends here with us in New Zealand. There was no doubt before this trip, but you know you’ve got some great pals when they wake up at 4:30 to take you to the airport.

Thinking, like good little Canadian travellers, that you should arrive at the airport an hour before the boarding of your flight- we headed out.

We drove an hour to get to the Rotorua airport, and were surprised to see the airport not only quiet- but completely locked up. We met a kind security guard who unlocked the gate to the parking lot & cheerfully said- I’ll see you inside in about 5 minutes! That’s when we realized Rotorua is not only a small airport…but a tiny one. 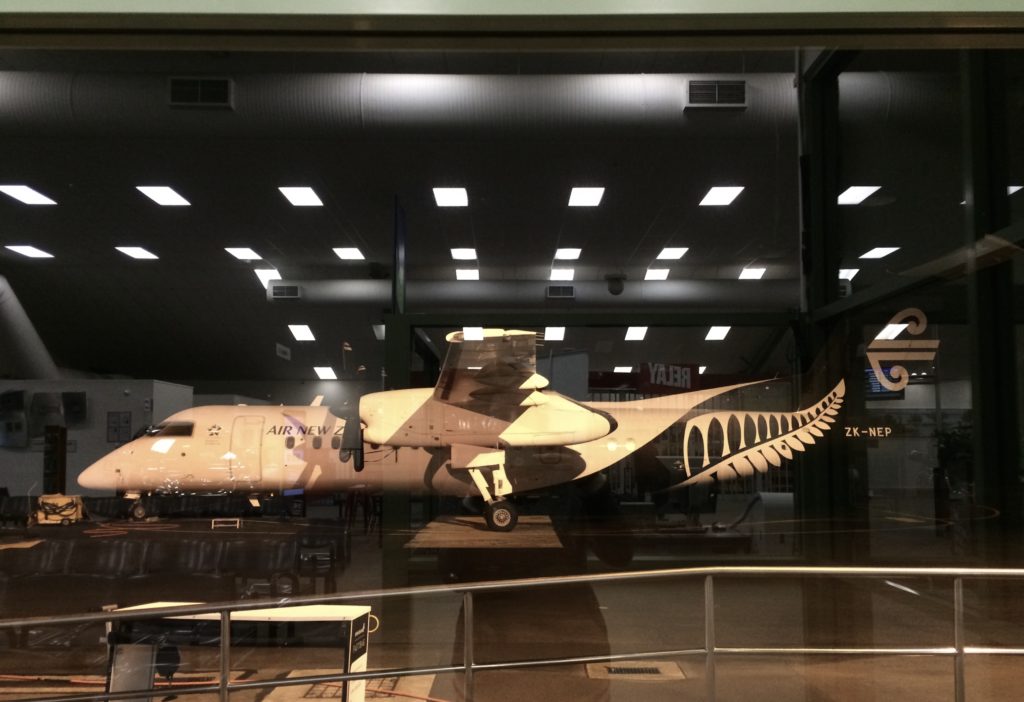 The security guard who unlocked the parking lot gates, then went through the airport terminal turning on all the lights and unlocking the door for us.  We had to wait for the gate agents to arrive for their early morning shifts. It was neat to be in a little airport where the waiting area shares space with the flight gates. We walked out onto the tarmac, and didn’t even need to go through a security checkpoint! Just like the good ol’ days… 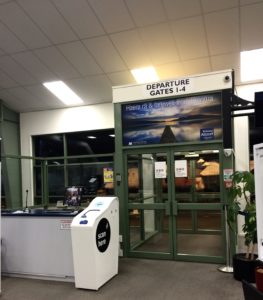 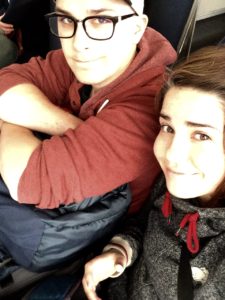 Several hours and 3 flights later, we arrived in Adelaide. We boarded a city bus and sought out to settle at our hotel for a few hours.

The nature of conferences are that they tend to eat up a large portion of time. In Joel’s case, there was lots of really rewarding time spent meeting and greetings both before and after his speaking engagements.

He said there were some thoughtful questions, and found most participants to be genuinely eager to learn more about conversion and the digital field, in general. Both insights are a great reward for Joel as his speech lead to the most-attended full day workshop!

While Joel was rockin’ the speaker circuit… I was doing a lot of walking.  It was really fun to walk around the CBD (Central Business District- which seems to be a common term for downtown in both NZ and Aus), and found that my week was almost too short to see all this beautiful city has to offer.

Adelaide’s city centre is built in a neat grid, which is fabulous for any pedestrian traveller. Most roads are fairly easy to navigate, and the only some-what confusing part is King William Street. King William had some-what-intimidatingly proclaimed “I am the King and no one shall cross me”, so all the avenues that run through King William street change names from the west side to the east and vice versa.

Adelaide’s four corners of downtown are intentionally green. Each corner has a beautiful expanse of space- whether a botanic garden, zoo, or city park. I love this. Not only for tourists, but I thought how lovely it is to have that open space for workers downtown. Having the option of a lunch-hour nature walk is lovely.

The city is full of surprising alley ways that were reclaimed into pedestrian walkways with rows of shops and cafes. There are also loads of antique buildings, fountains and cobblestone streets. It’s a wonderful mix of new ideas and architecture with the obvious history that built the city- fountains, hotels, the university. Really lovely. 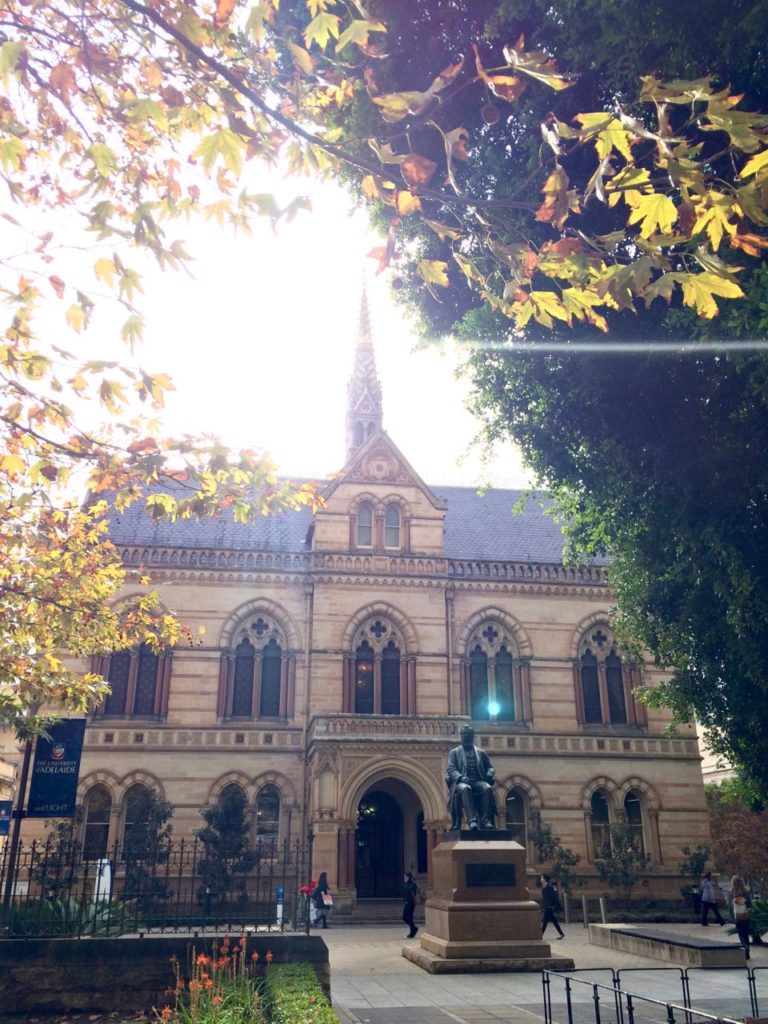 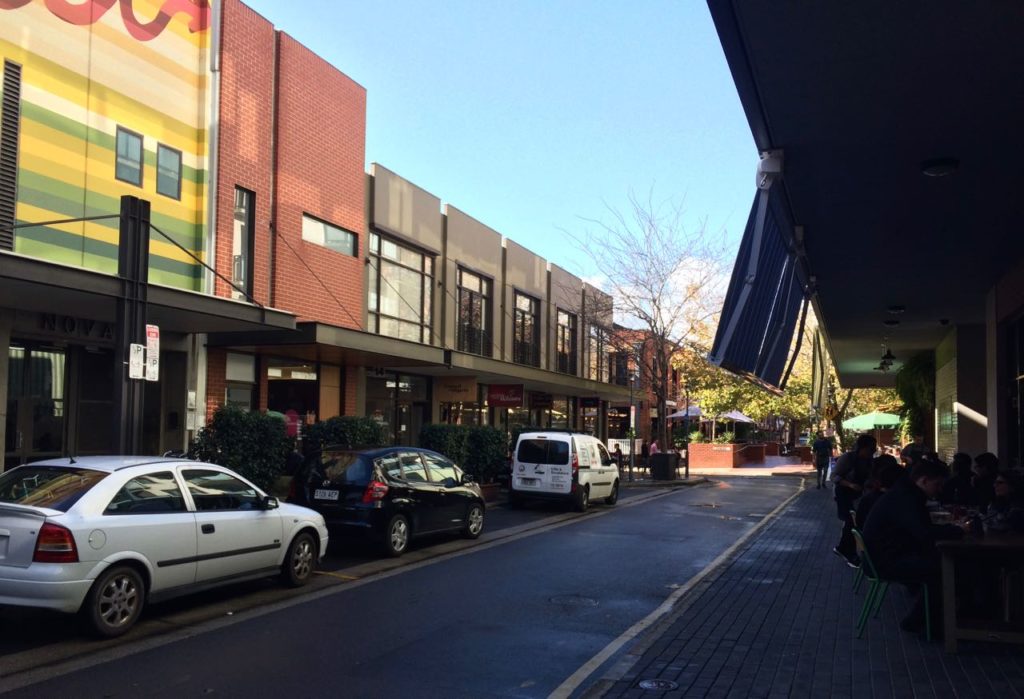 I had three days of lonesome travelling. Often when I have too much time on my own I start to live inside my head and get… well, a bit weird. Thankfully! I didn’t experience this much on our trip, and mostly enjoyed my introvert time.

Day 1 started with a quick hotel breakfast with Joel, followed by a stop at a little (and I mean little- scarcely more than a bar and table fit in this shop) stop at Please Say Please, a cafe that boasts barista-crafted coffee and a daily macaron special. 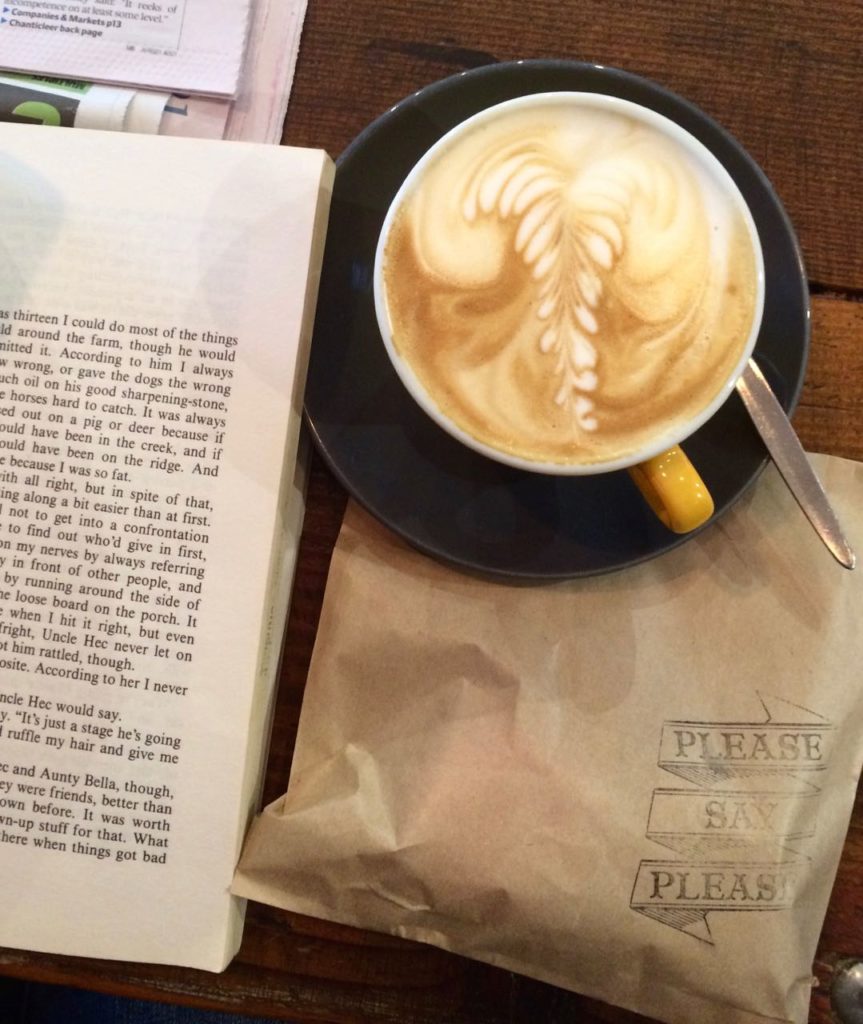 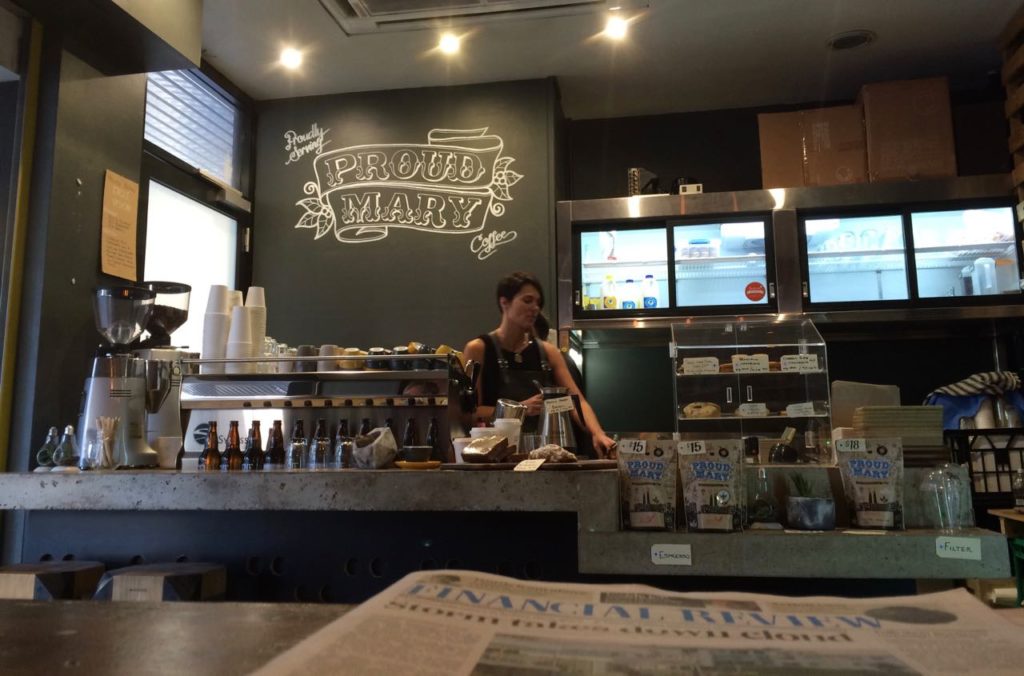 I caught up on my book for a few minutes and enjoyed my coffee while saving my 2 macarons for an emergency- cherry pie and the daily special, baklava were my flavours of choice.

On to the Art Gallery of South Australia. A few of the exhibits were under construction, but I was surprised (for the first time of many on this trip) that there were no admission costs. I went up to the information counter expecting to pay my entrance fee, and was instead greeted with a very eager middle-aged woman who was thrilled to share all the open exhibits and make suggested routes through the gallery. 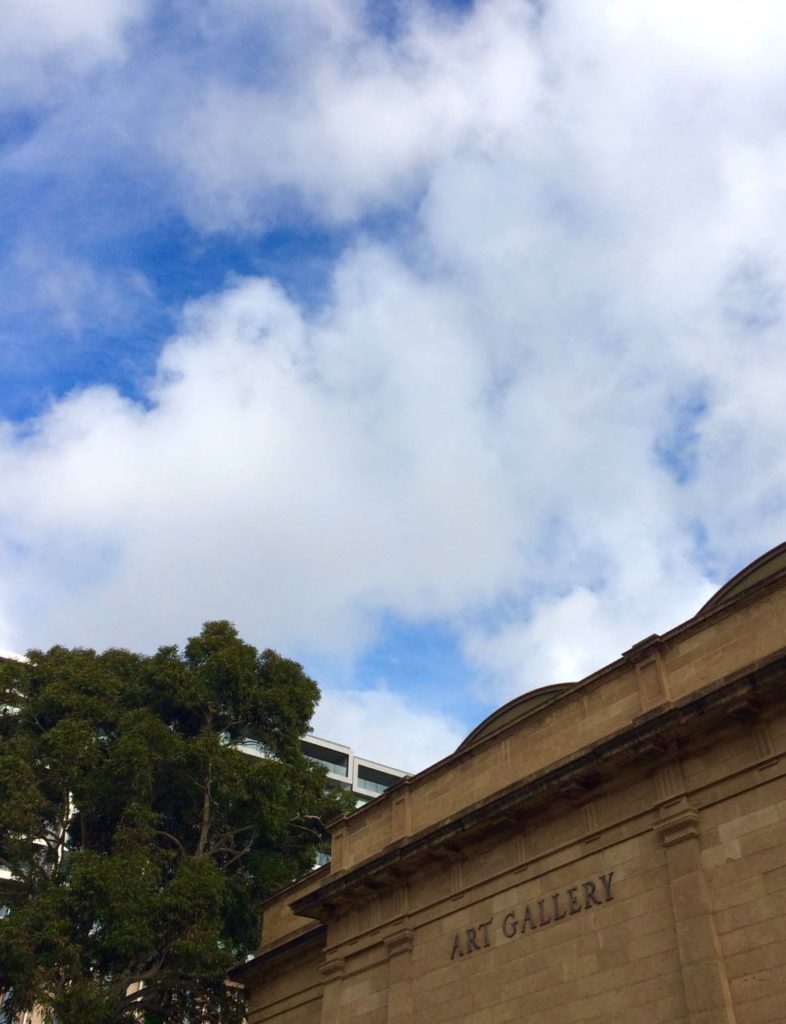 I was interested to see some art from Australia and the Adelaide area, as well as a vast array of other piece from Aboriginal artists, to photo exhibits, installations and even a handful of French Impressionists’ work. The gallery was only made more lovely by it’s book store that was full of amazing treasures. Their children’s book section made me wonder how I could fit them all in my carry-on… but I restrained myself, and instead left with some great options to watch out for over time.

After dipping into my macaron stash, I was re-fuelled enough to venture back into the city and wander a bit. I would up and down streets, on the prowl for a lunch spot. Following the crowds, I landed at a spot that made fresh lunch plates as well as coffees and handmade chocolates. With 60s soul music blaring, I soaked up the surroundings and feasted on a spicy chicken sandwich with a interesting (yet satisfyingly zesty) side salad. On my way out, I picked up some hazelnut ‘m&ms’ made in-store to share with Joel when he finished up for the day.

Back to the hotel for a rest and some painting- which I have neglected for all-together too long. 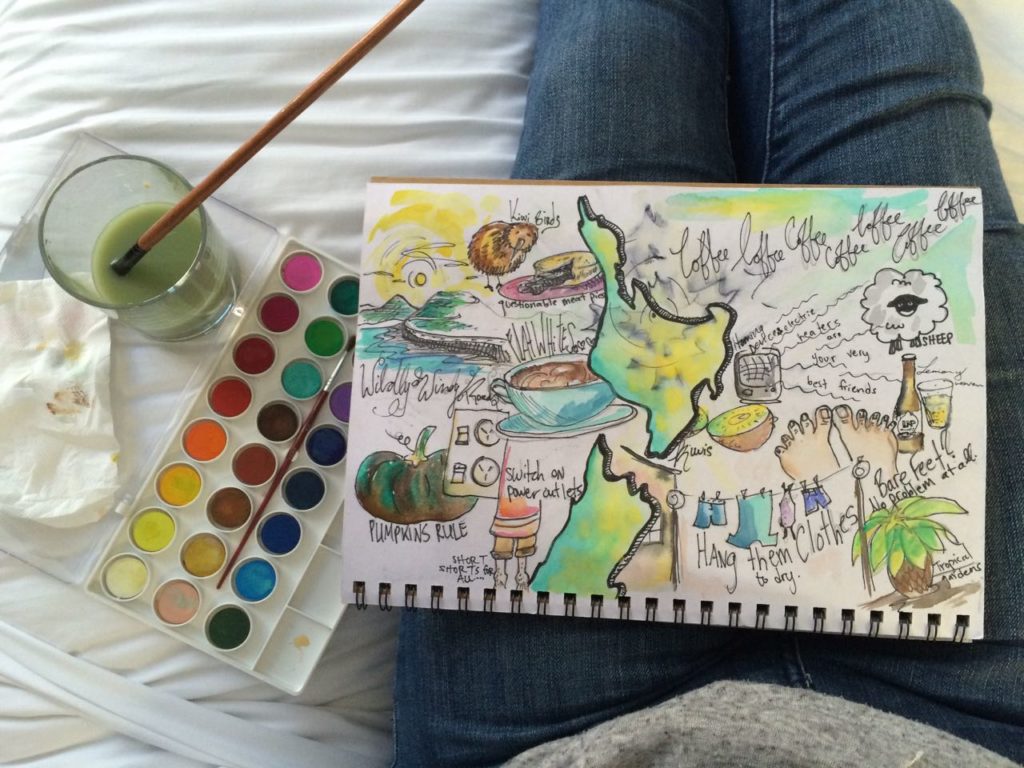 Joel arrived back from his day and we walked the 15 mins or so to Cooper’s Alehouse for dinner and some time with the conference crew. We weren’t aware at the time, but Cooper’s is known by the locals to offer some of the biggest schnitzel around. Little did Joel know as he order this behemoth: 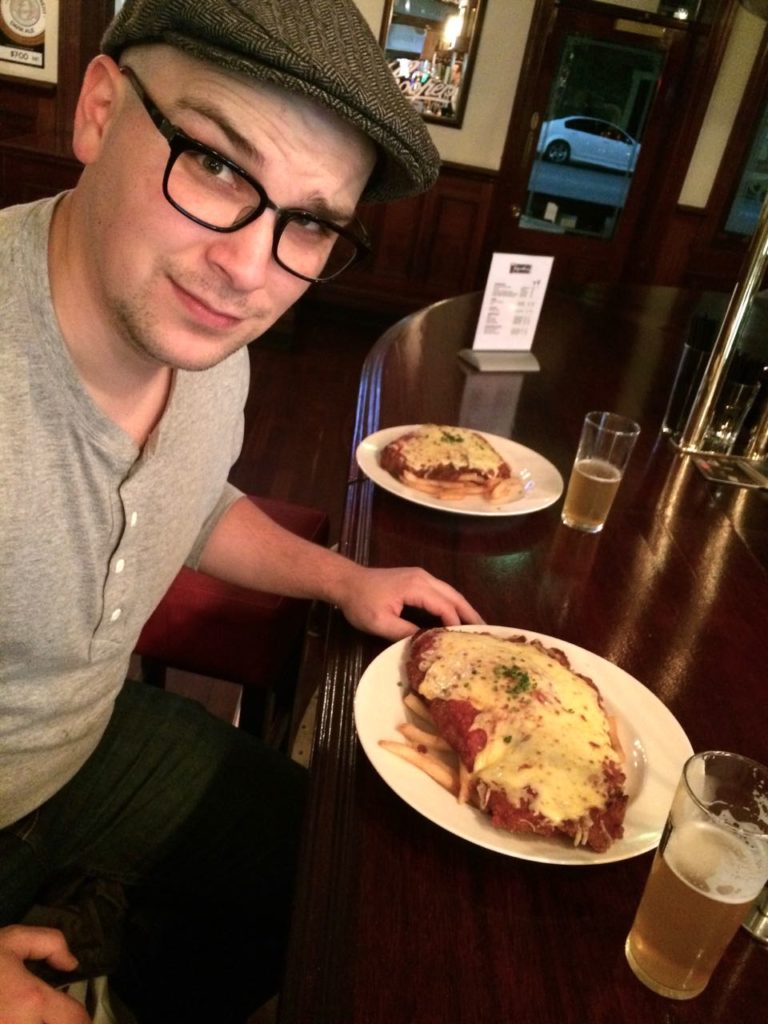 He valiantly tackled what he could, and the rest of the evening was spent trying to digest that beast. Ha…

It was nice to visit with a handful of good people before walking back to our hotel to conclude our first full day on a new continent.

Wednesday was a great day for just enjoying the indoors- there was quite a bit of rain throughout the day, so I didn’t venture out as quickly as the previous day. I had read about the Adelaide Central Market, and was informed it’s the oldest market in the Southern Hemisphere! I was interested to have a look.

I set out, and was happy to see the weather hold as I walked. The market is now surrounded with 2 ‘arcades’ on both sides- long hallways packed with shops and cafes. There’s even a food court of one side now. It’s held in this old stone building, and has about 5 long, double-sided rows to explore. It reminded me quite a bit of the market on Granville Island, although… going on a Wednesday morning meant it was far less crowded then Granville- I didn’t mind that at all. 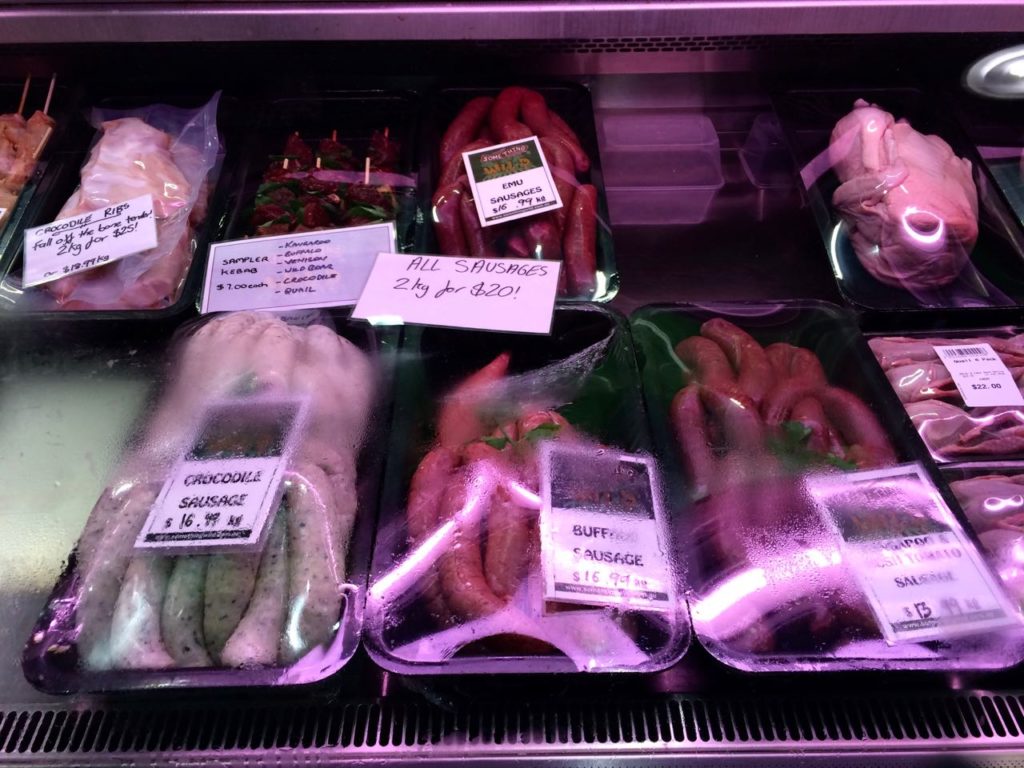 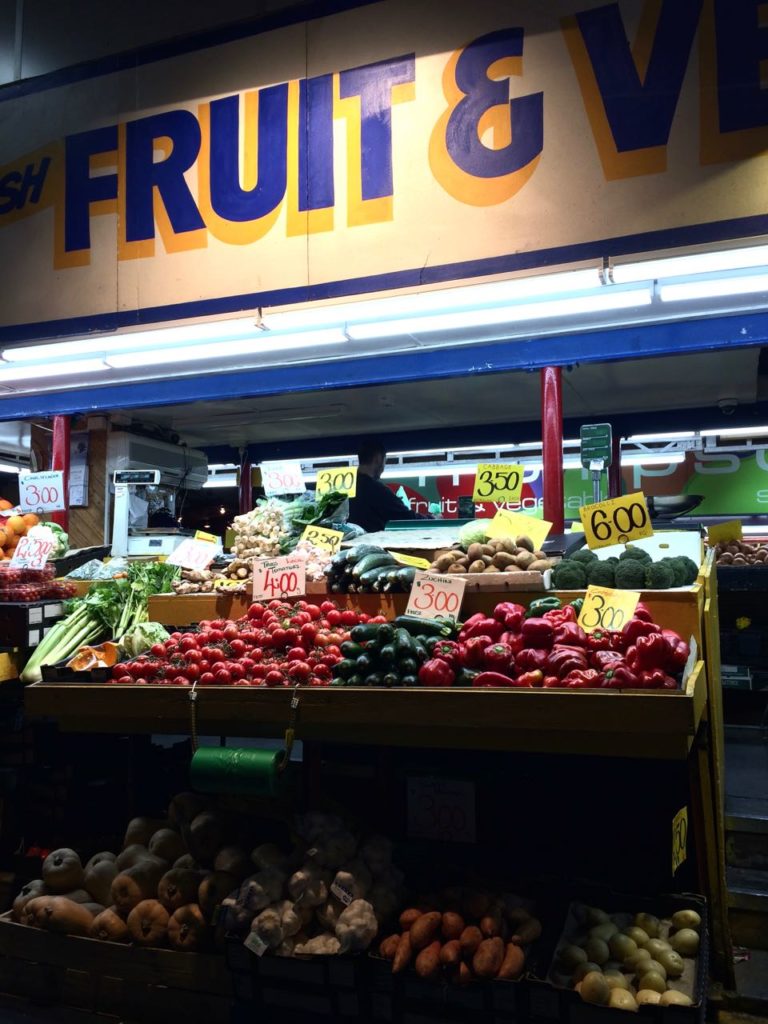 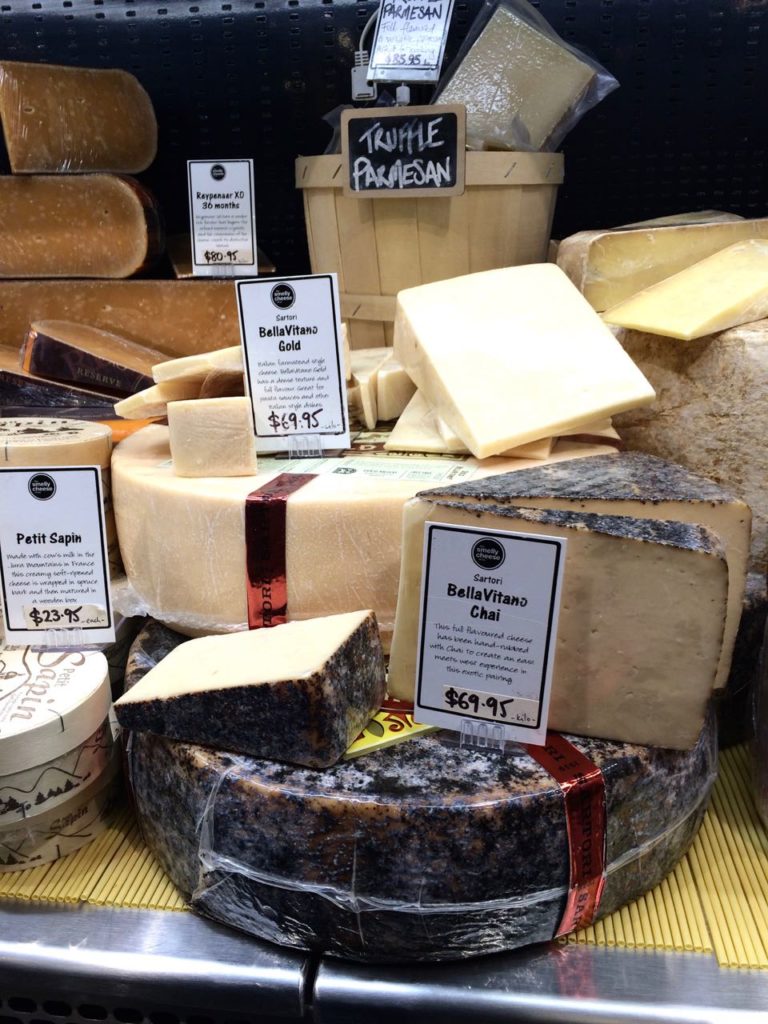 There were lots of opportunities to sample the different foods, and each row was packed with all sorts of goodies- candy, coffee, cheeses, loads of produce- both rare and ordinary. It was a colourful place that was perfect for spending a couple hours. I saw chai cheese and all sorts of interesting meats- emu, crocodile, kangaroo, etc.

I was happy to grab a beautiful little cappuccino as I strolled and was even more pleased to have an awesome sausage roll for lunch. I kept seeing sausage rolls in New Zealand, and had been kinda waiting to be called to by the perfect roll, and well.. this one did not disappoint! Full of delicious meat- looks like bacon along with onion and other tasty bits, topped with poppy seeds and a smoky, tangy BBQ sauce. Yum! 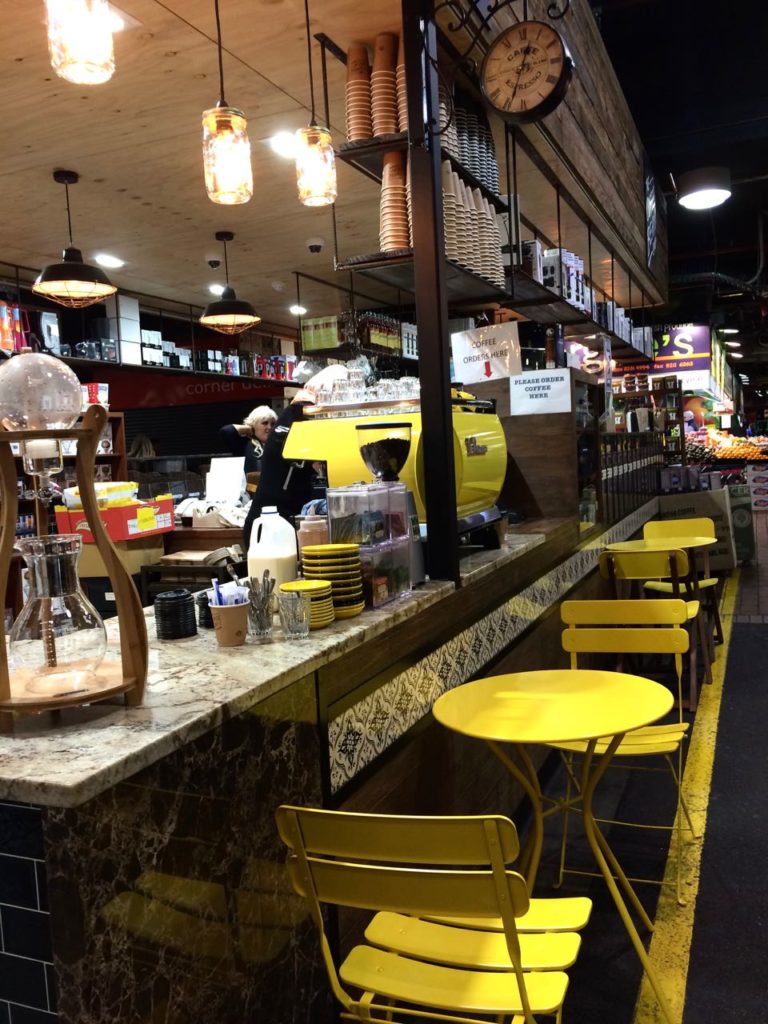 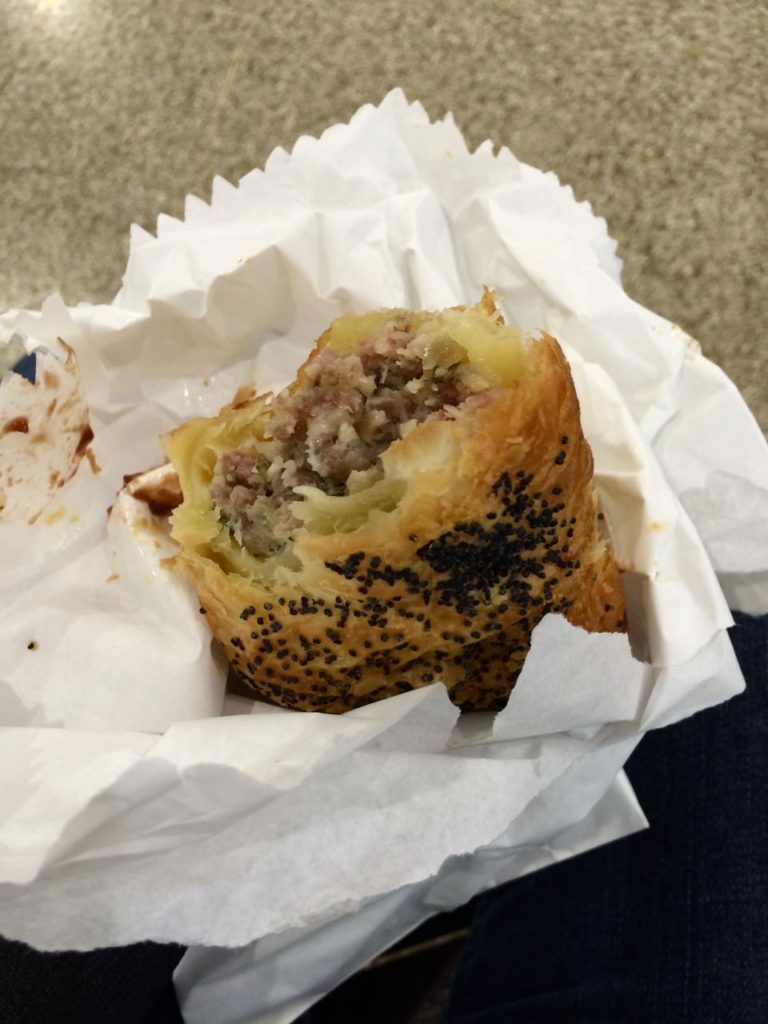 I was hoping to get back to the market with Joel, but our timing didn’t line up before heading back to Papamoa.

I often forget that the seasons aren’t what I expect them to be, being a Northern Hemisphere kid, but Adelaide had a wonderful way of reminding me. The path that lead back to the hotel was littered with orange maple leaves the size of my head, and the golden tree boughs would frame some of the ancient churches in such a magical way. Adelaide is the city of churches, and it was cool to take some of them in on my walk. 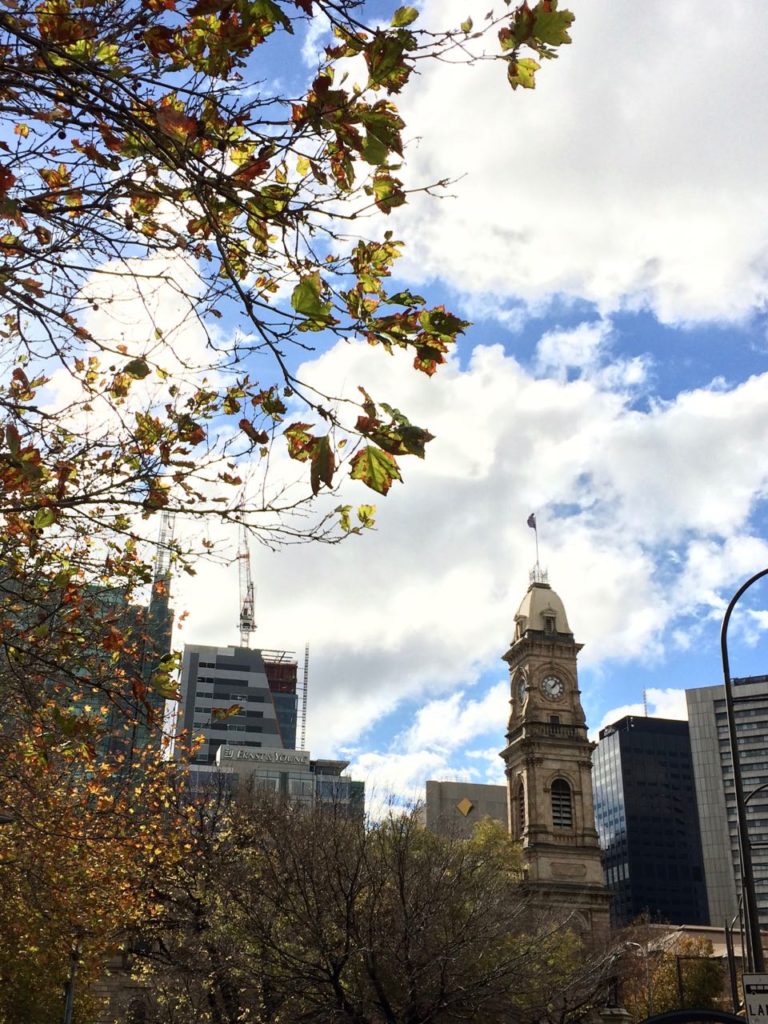 Joel and I walked down Rundle Mall (a pedestrian street with side-to-side stores and food stops- the first outdoor pedestrian mall in Australia) that evening to grab some supper and ended up down another reclaimed alleyway featuring half a dozen well-rated restaurants.

We ate at Bread and Bone, which mainly features burgers in different styles, and you enter through a hobbit door. We were tempted by several menu items, but (with the waiter’s encouragement) landed some solid choices- a juicy steak sandwich for Joel, and I had the best fish burger I’ve ever tasted. This was accompanied with a dark and stormy, which again… was the best I’ve had. 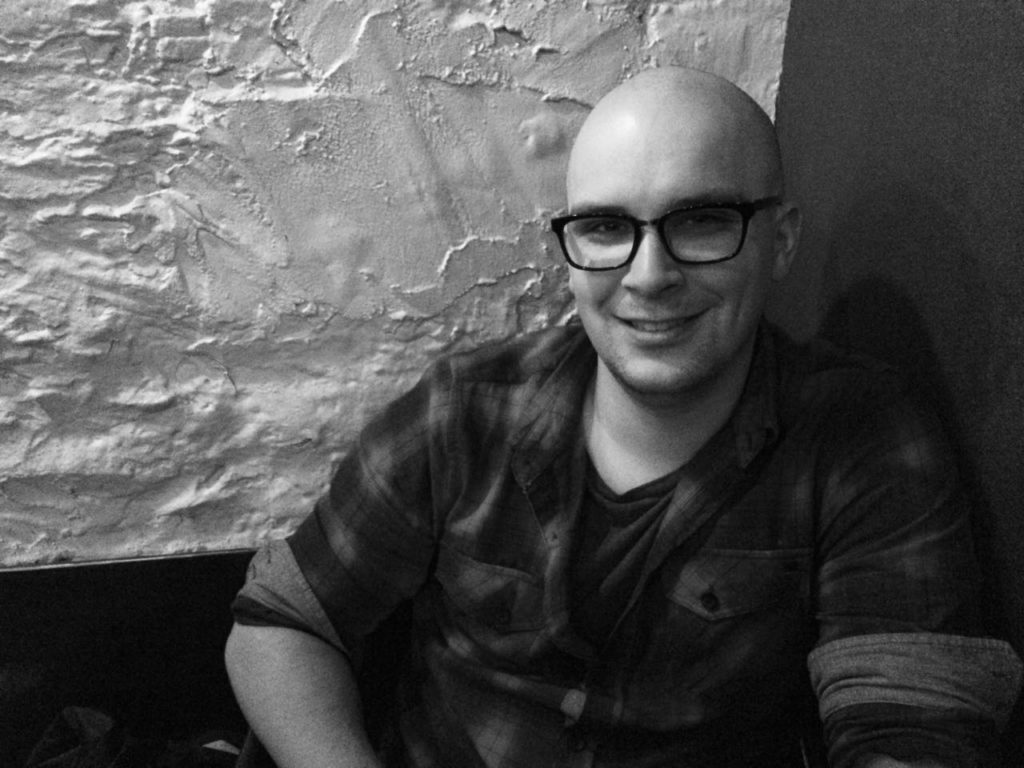 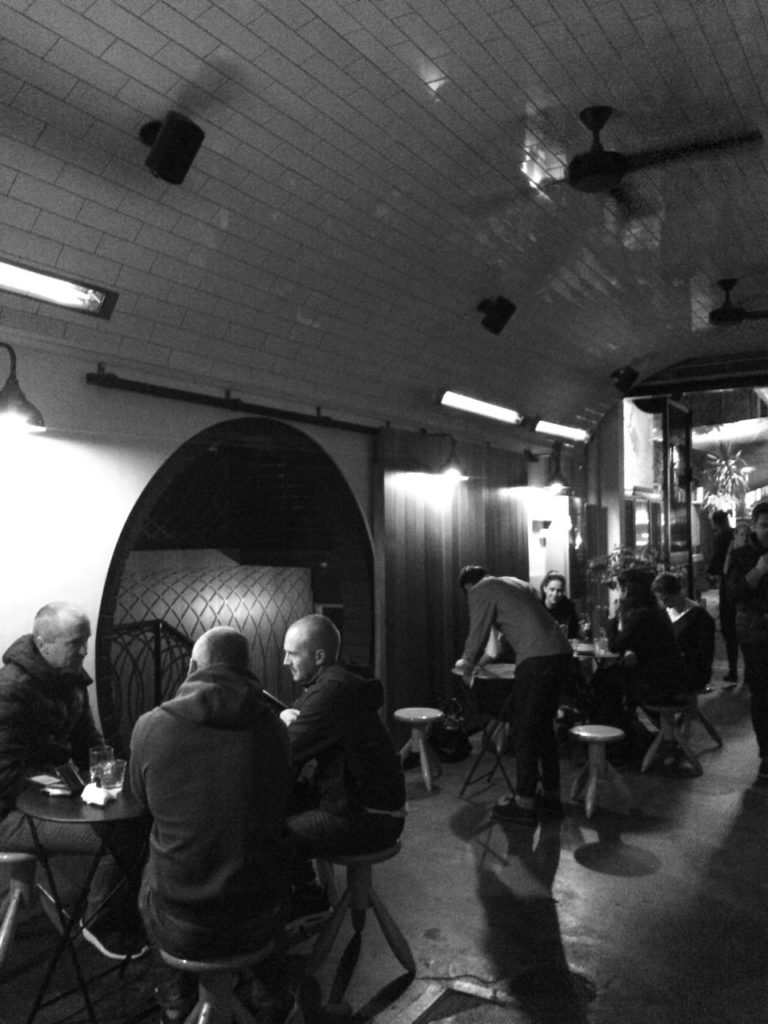 After a little running around in Rundle Mall, Thursday was spent attempting to enjoy the outdoors. It had been raining on and off, and I wasn’t sure what all I could accomplish that day. So, once the clouds had parted enough, I ventured over to our second hotel to check-in while Joel headed to teach his 8 hour workshop.

Thankfully, the hotel took me in early and I was able to wait until the next break in weather in a warm, dry locale!

For lunch I weaved in between buildings to find a little Afghani restaurant that had good reviews, and when I walked by I was happy to notice it was also the busiest spot on the block! I ordered a traditional lamb burger and completely revelled in the fresh flavours. Good find, for sure. 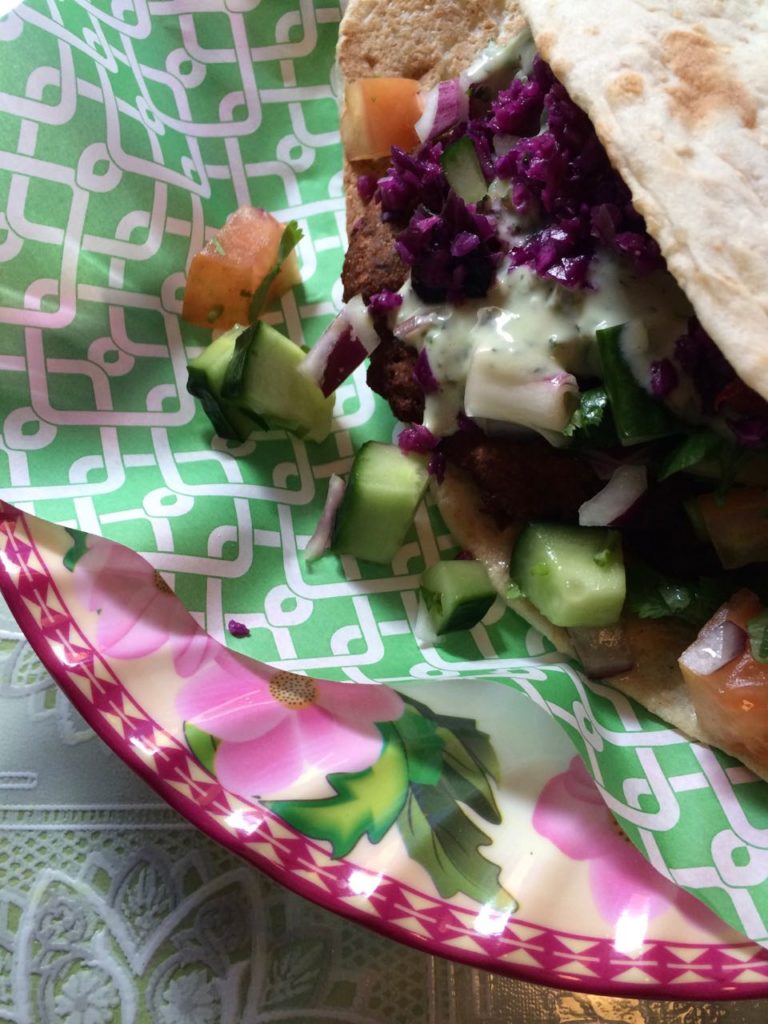 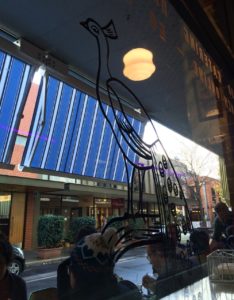 Continuing my wander… I found myself at the Adelaide Botanic Gardens. Again, pleased to have free admission and wonderful scenery. I was happy to wind through the pathways and overcome my fears of critters! 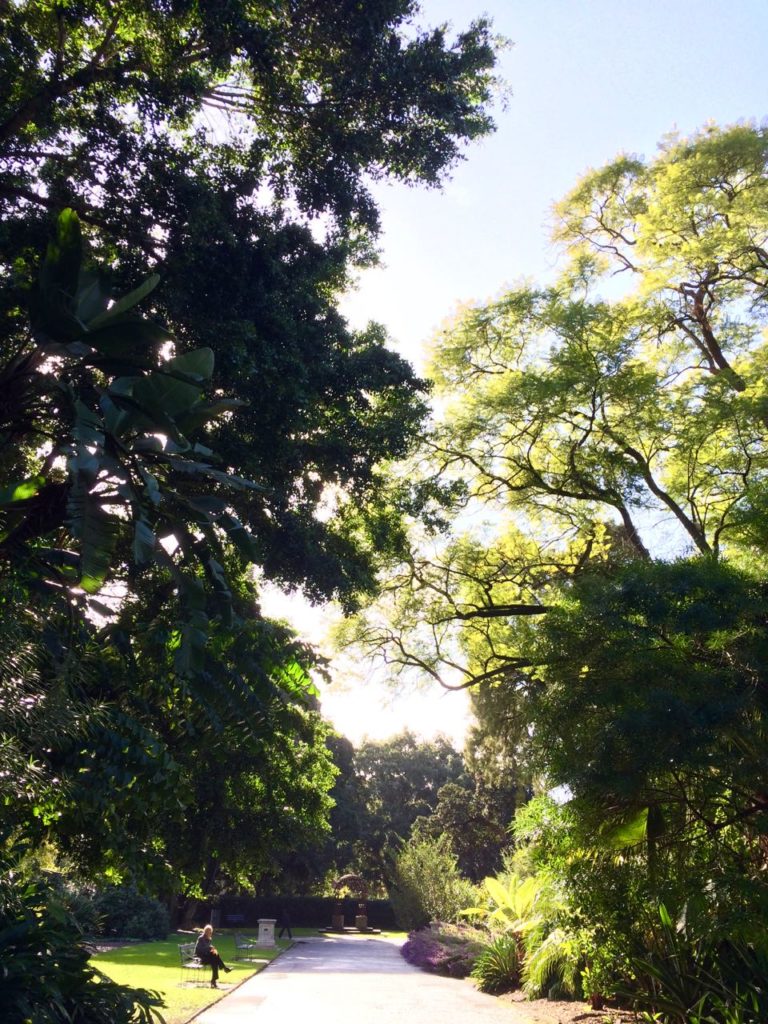 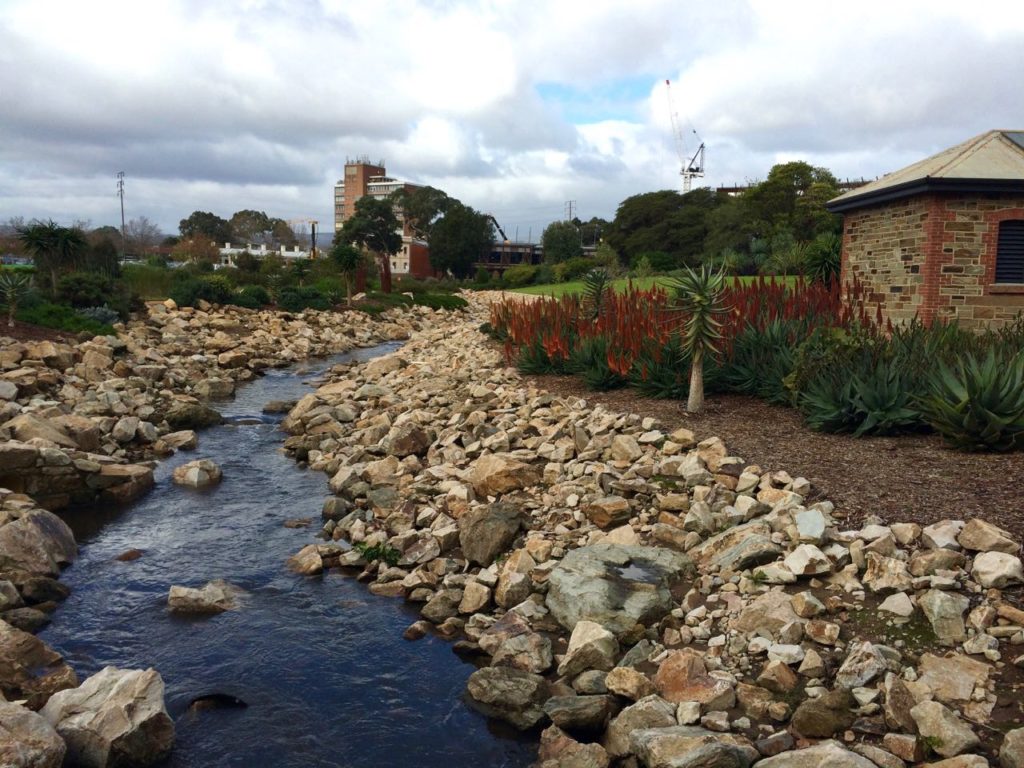 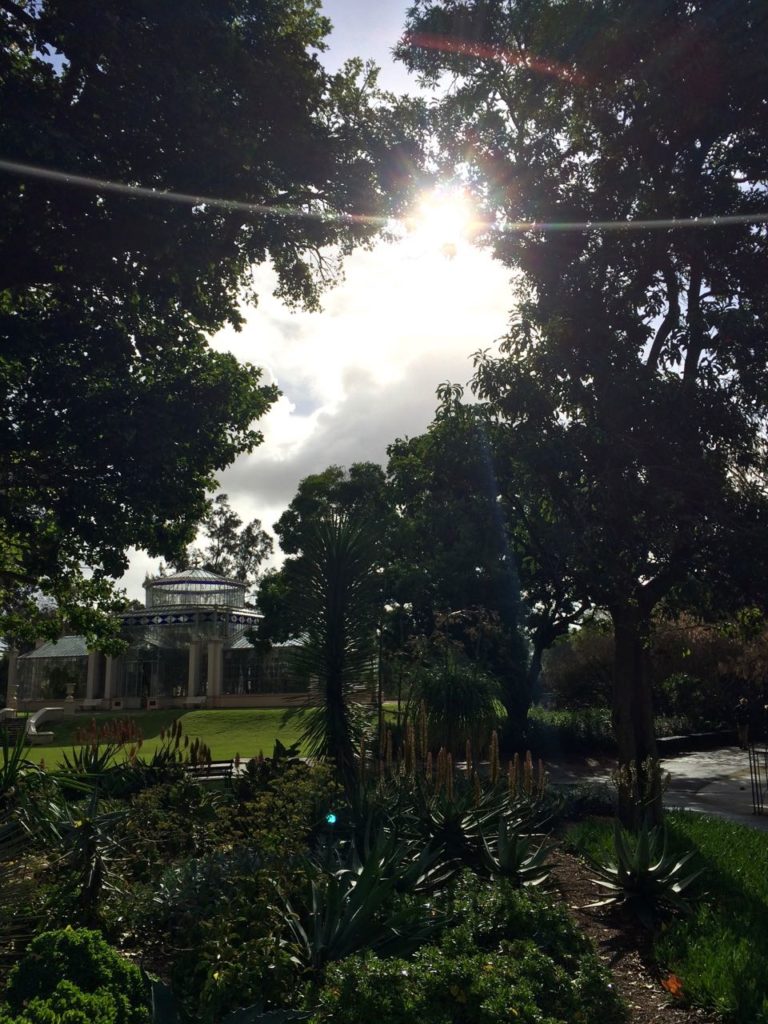 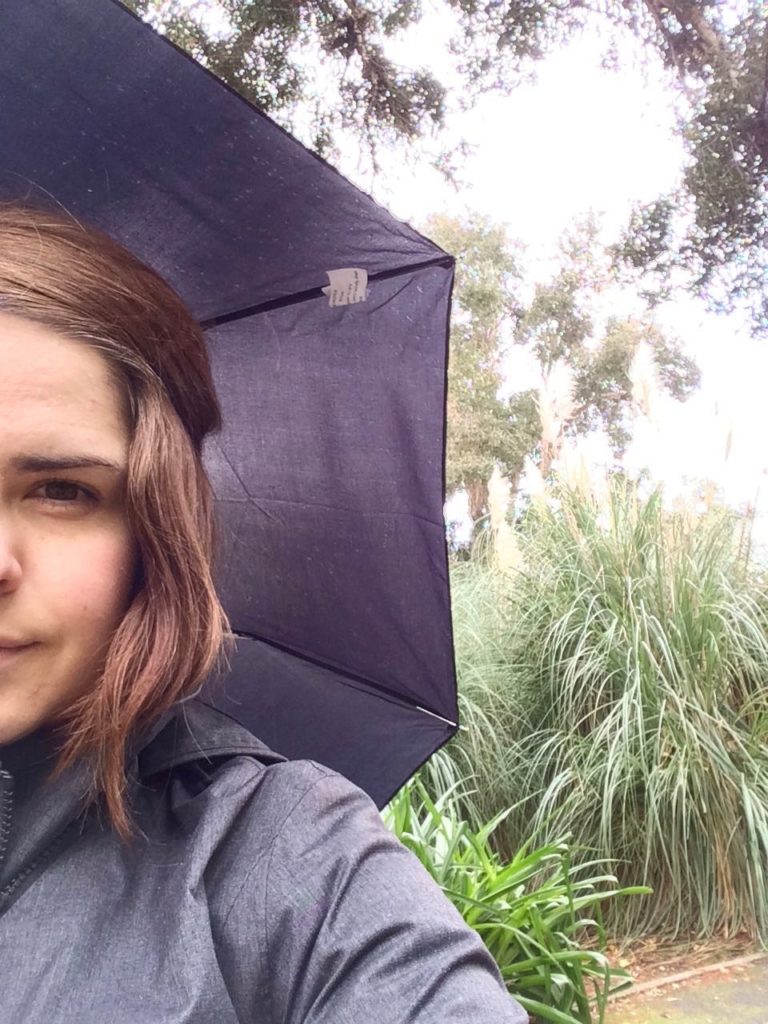 The rain ceased enough for me to get a handful of good pictures, and then I was forced back indoors. I ventured from the gardens to the mall for a handful of rainy-day materials- a face mask and bath balm!

The theme for the day was green. 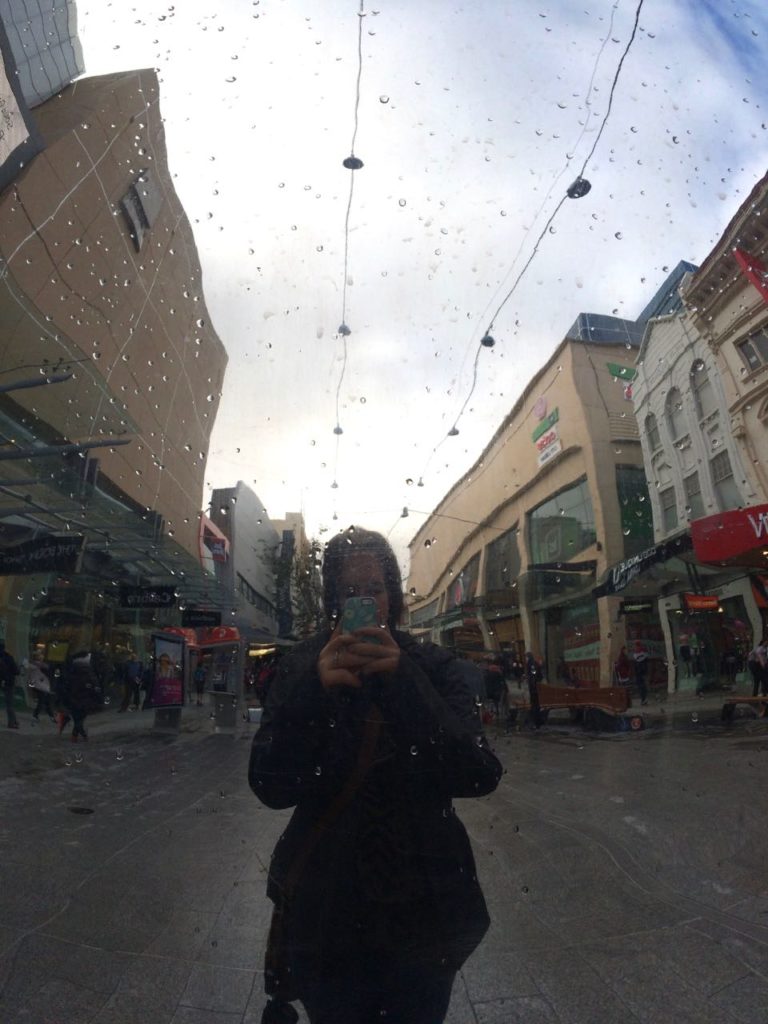 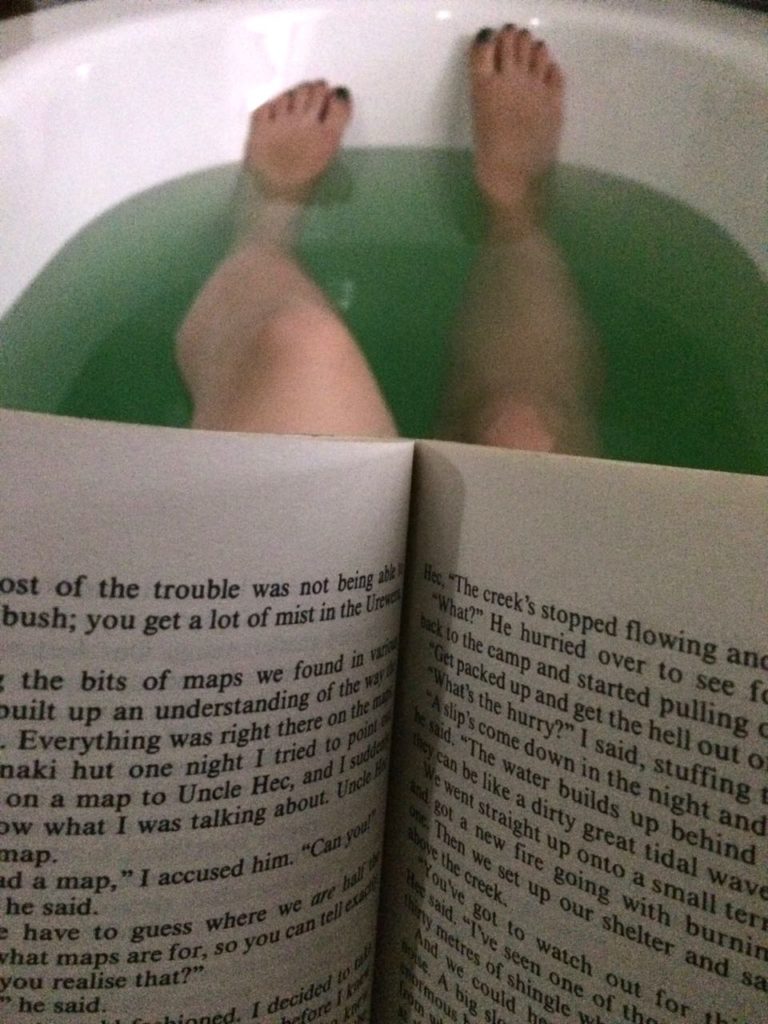 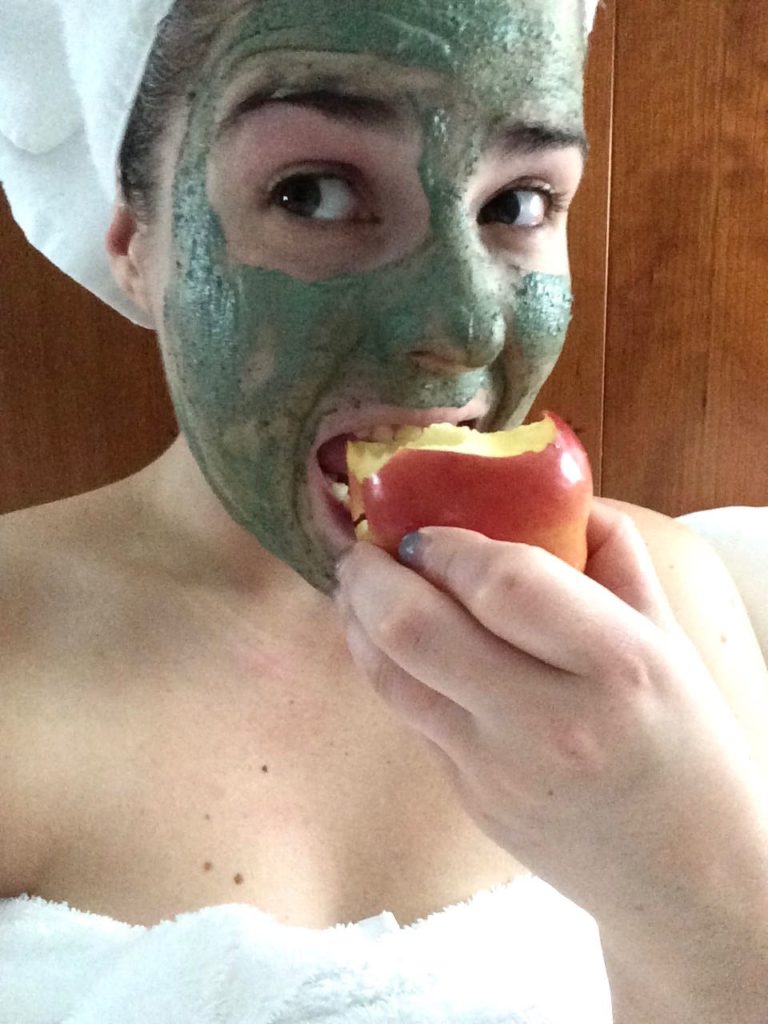 Joel headed back to the hotel to share his workshop news and my dream dinner, room service! 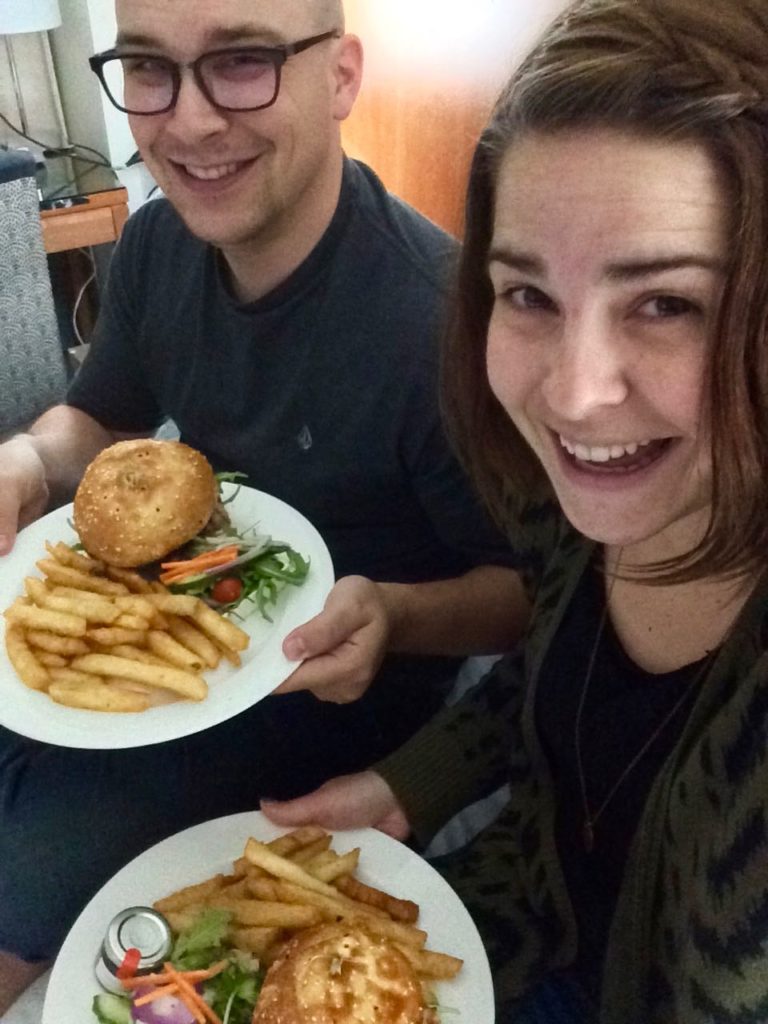 So ends the journey of the lonesome traveller. Joel was able to join me for a few adventures, which was awesome. I’ll share our mutual experiences on another post, since this one is officially the longest of Kiwis and Klettkes’ history!