The Beginning of Weekend Adventures

We have had a home and wifi dwelling within it for several days. Joel and Brandon have been able get to work a bit now, and we’re becoming more settled with each passing week. We’re catching a glimpse of our new normal.

I’d like to find some work while I’m here- not only to help out with living and adventure expenses (my coffee habit should be sustained with some sort of income, too), but also to get out of the house and start making connections.  I’ve only just started browsing and hope to keep an eye out for shops and community work that might be available for a few months. Early days, I suppose.

With work on the go and in the wings, we are hoping to establish a habit of weekend wandering. No time like the present!

On Fridays in the Mount, there’s a small gathering of food and coffee trucks that park outside a local clothing shop. I’d been browsing for different activities to partake in on event finda (yes, many of the websites and companies we’ve come upon encourage the kiwi accent), and the poster for the food trucks caught my eye. SO, we made a trek. 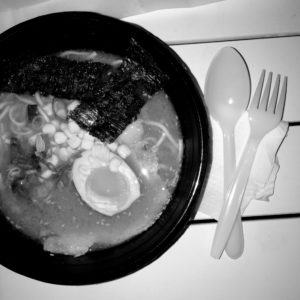 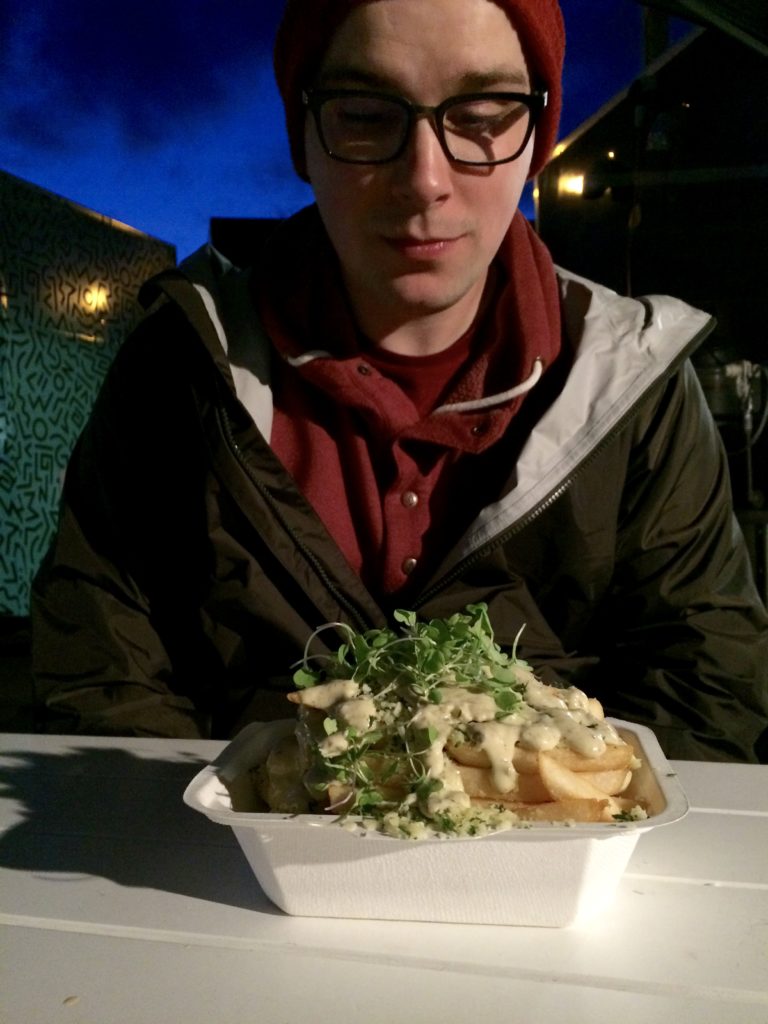 Even though the gluten free options were sparse, we found a couple treasures. I had a nice miso ramen soup, Joel had a tasty sandwich inspired by Peruvian street food and we shared some loaded fries (aioli, parmesan and other such additions adorned those bad boys). It maybe wasn’t the vast lot of trucks we’d envisioned, but the event got us out of the house to do a little something different.

Saturday started with pouring rain and a mighty wind blowing off the sea at home. We had plans to go up island a ways to enjoy some touristy things, and just hoped the weather would improve as we drove. Thankfully, the sun started to peek through the grey as we made our way North.

We were about 40 mins away from home when we noticed a bakery that boasted gluten-free options. We had been fooled by such signs before, but felt it necessary to give the place a shot. We were not disappointed! 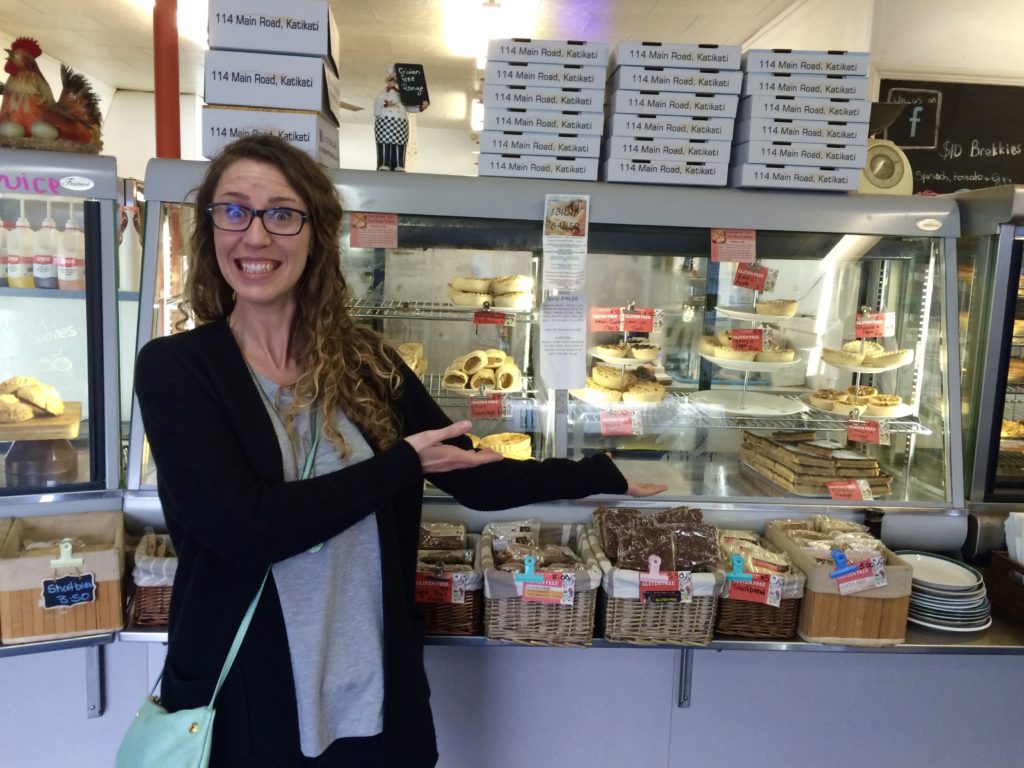 Stacey found a whole case full of delicious treats. There were all the things New Zealanders love (pies- savoury and fruity) as well as many things Stacey loves- ha! We will definitely make another stop soon.

In order to take in our experience and enjoy the trek, we stopped a couple more times as we travelled. The next stop included farm animals and cheese samples. The Cheese Barn at Matatoki was a quaint stop off the highway. We had fun greeting the creatures that lived there and trying some cheeses made on sight. I would definitely venture back for a cheese board another time- they looked fabulous. 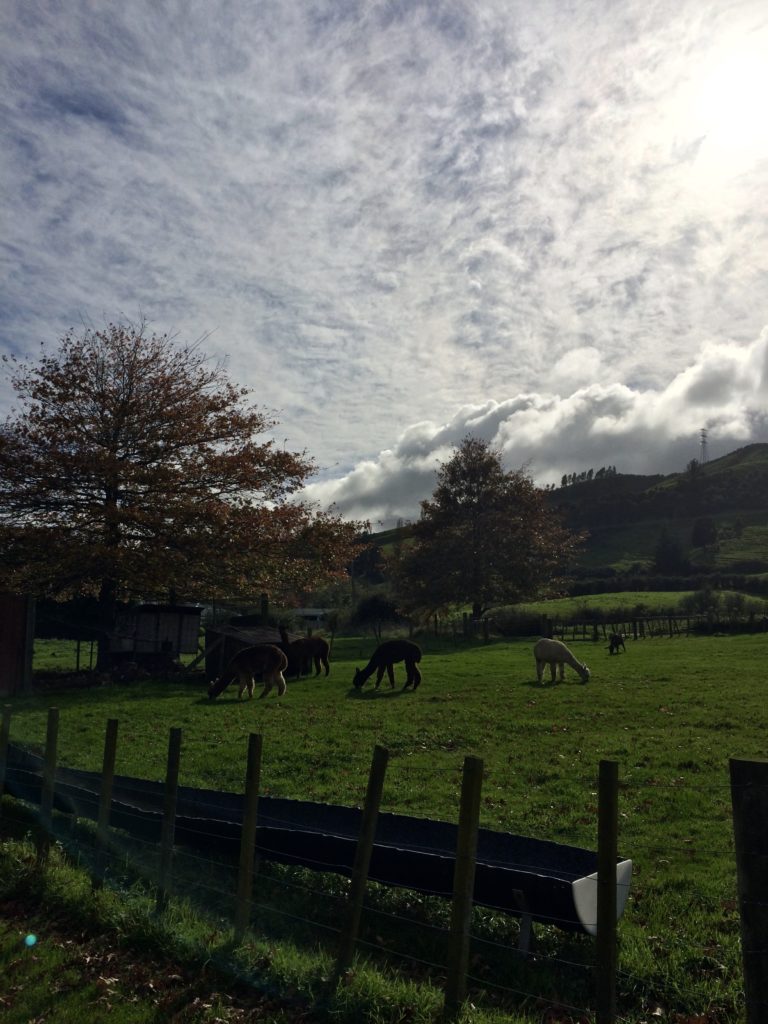 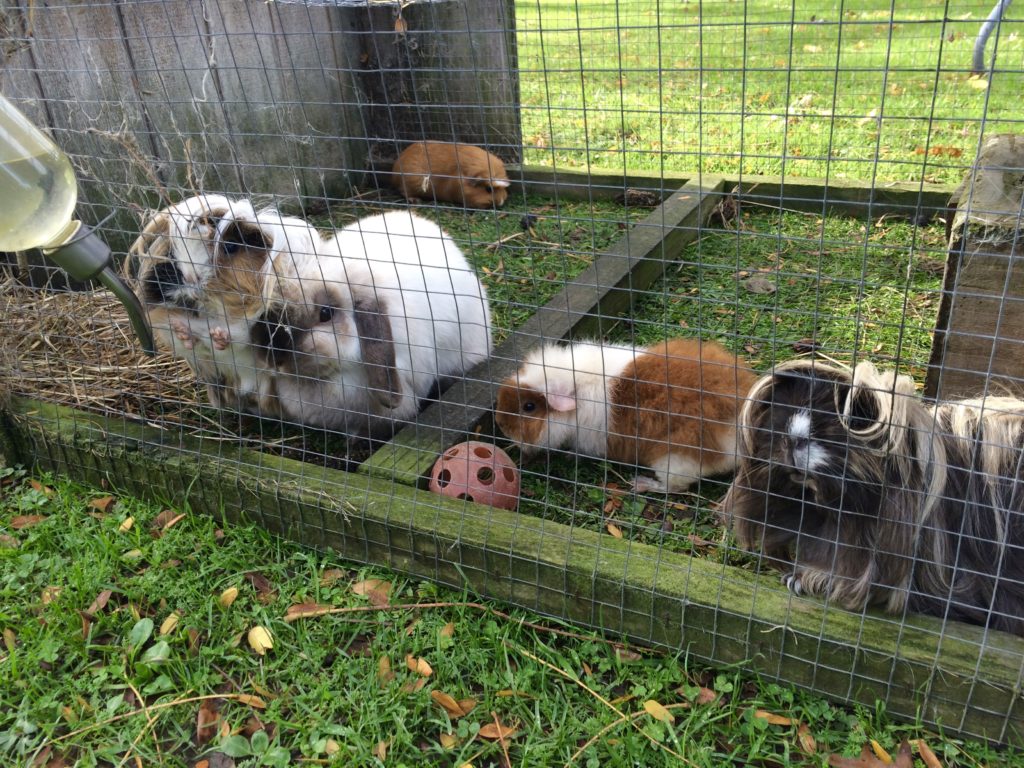 (photo enlarged mostly to get the full effect of that guinea’s hair, lol- like, woah, bro)

We continued on to our little passenger train ride. I had been looking at things to do in Coromandel, and after we had decided on the Driving Creek Railway and Potteries I realized it was a stop some friends had made on a trip here several years ago- which is neat.

We wound along roads that didn’t quite seem wide enough for two vehicles. The road was a beautiful one, no doubt, but something to get used to for a car full of Alberta drivers. We weaved our way up the Coromandel peninsula driving as near to the ocean as one can without the need of a bathing suit. There aren’t shoulders on the road and at times, it felt as if one gust of wind would push ol’ Crumpy right into the mighty waves!  Occasionally we would come across a tree growing from the bank toward the ocean, and the road was so close to it, the line painted on the edge of the road would bump over the roots penetrating the pavement.

Thankfully, we made it to our destination in time to catch the train right away. We made the stop on the off-seasonal, so they weren’t busy enough to fill all the seats on the train; although, we heard during the summer break the train will run- full- from 9am to 5pm daily. 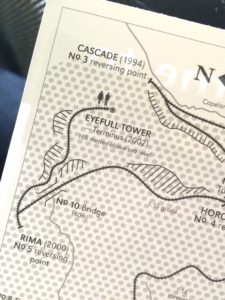 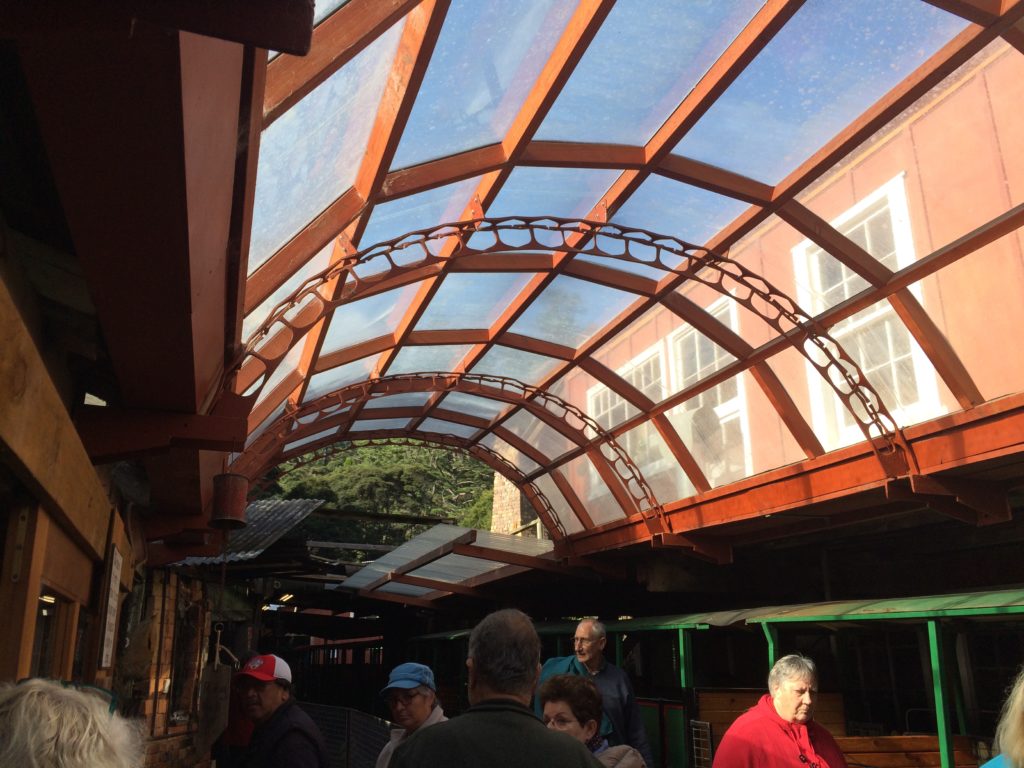 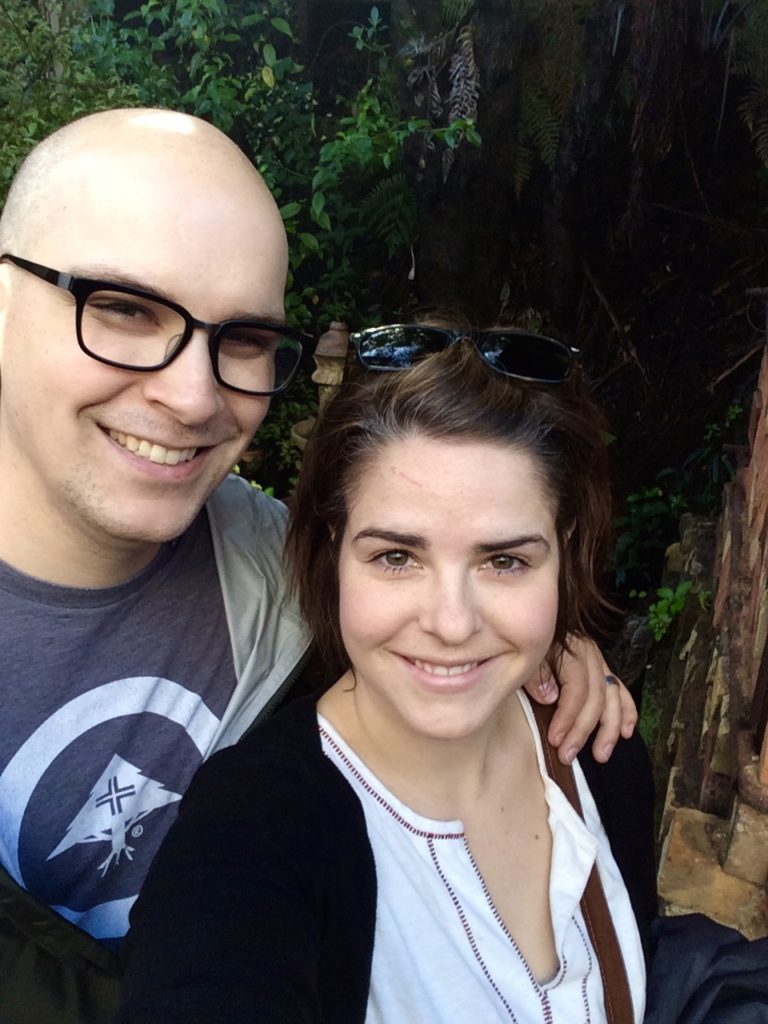 The story of the Driving Creek Railway is an interesting one. There was an artist who was hired as the Science teacher in Coromandel, who quickly realized he didn’t want to be a Science teacher, but he had already purchased land in the area. In the 60s or 70s, he decided he would instead work with ceramics, and became the first kiwi-born and based potter in New Zealand history. He eventually acquired more land to dig out clay to use in his studio, and made a small train that would scoot up and down the hill on his land to bring clay and materials easily from point A to point B. News spread, and soon the townspeople were showing up at his door to see if he wouldn’t mind taking them on a tiny train ride.

Over time, the train became a full-blown tourist attraction that still operates today. The track has been added on to and modified over the years, but the land is for tourists to enjoy. Artists still come to use the studio space, clay and many kilns to create their work. You can purchase pieces there as well as enjoy the views from the train and have a wander around. A cute stop, indeed! 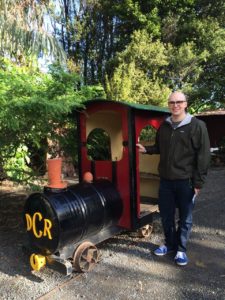 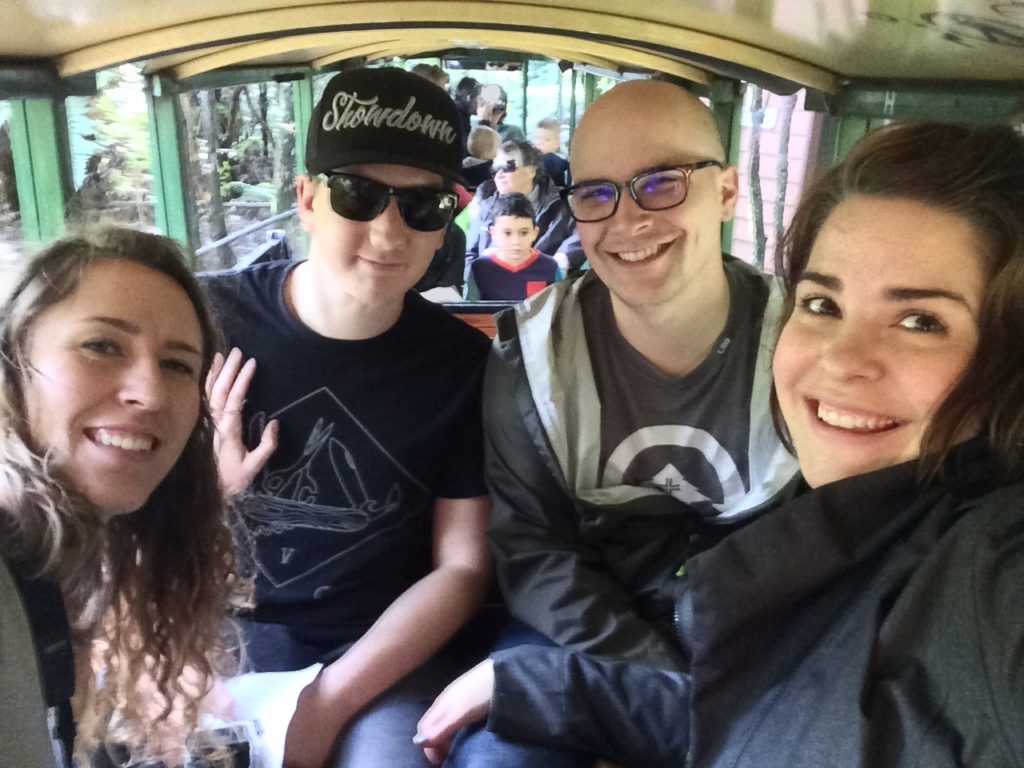 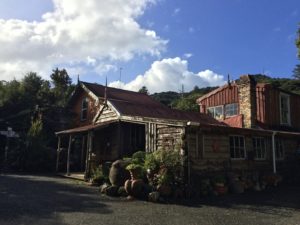 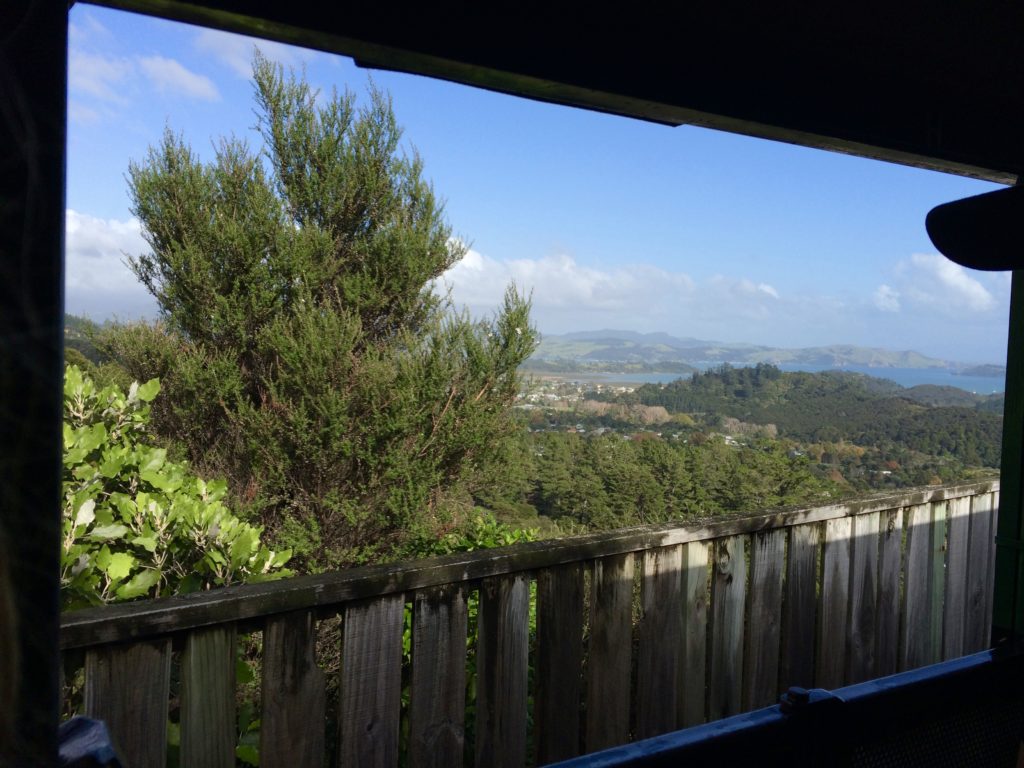 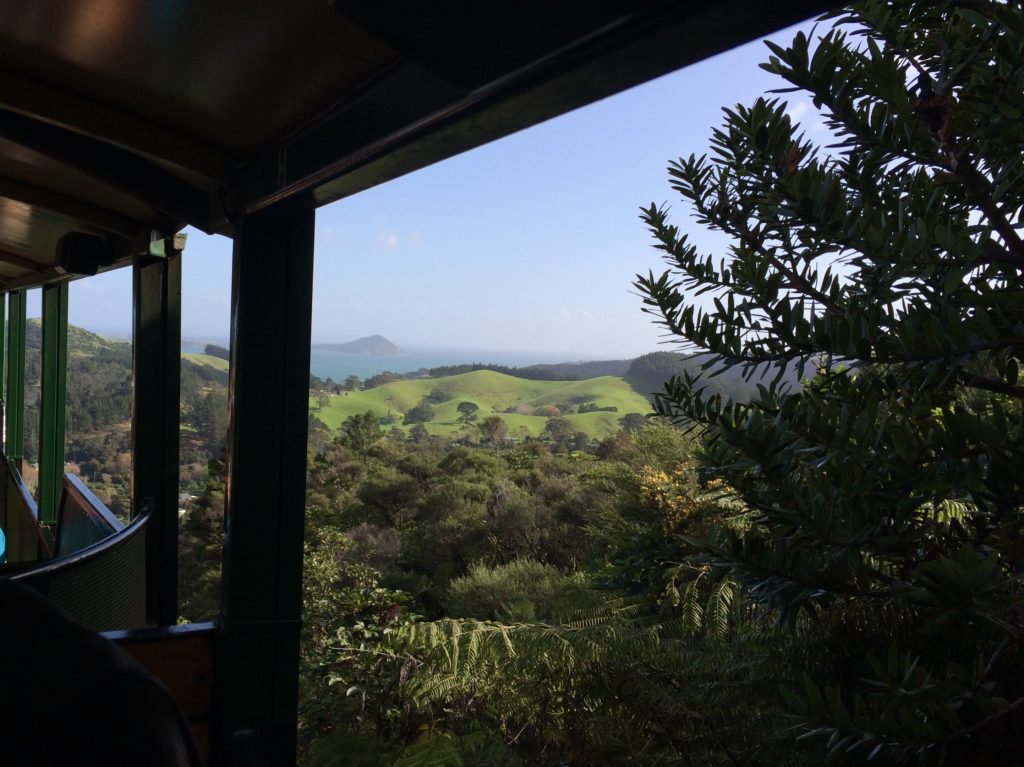 The 309 is the route we took after the most quaint tiny train ride and our next point of interest- Hot Water Beach.

Joel has since researched this road, as we were unaware at the time. We followed the trusty Google maps and were lured there by it’s predicted faster arrival time.

We left the paved highway (and even turned around to be sure and catch this short-cut) and started up a windy path that seemed have more twists and turns than you can count (although, we discovered later you can count them! There are 309 turns- as it’s name implies) we went up hills and down. We drove on paved roads, partially paved roads, and dirt roads that were so narrow- if you crossed a truck coming the other way it would result in a deadly game of chicken.

There were no pictures of this route, since most of us were concentrated on the safety of the crew and not tossing our cookies. We have since felt a little more kiwi, as several websites have noted warnings about tourists avoiding this road entirely and that it has been the demise of many unprepared tourists over the years.

As we approached Hot Water Beach, we calculated we should have time to see Cathedral Cove before we dig ourselves a natural hot-spring tub on the beach at low-tide. We continued on the few extra kilometres and got out to explore. 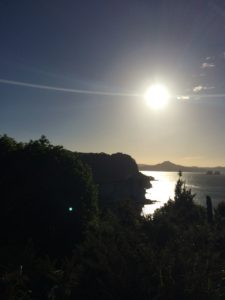 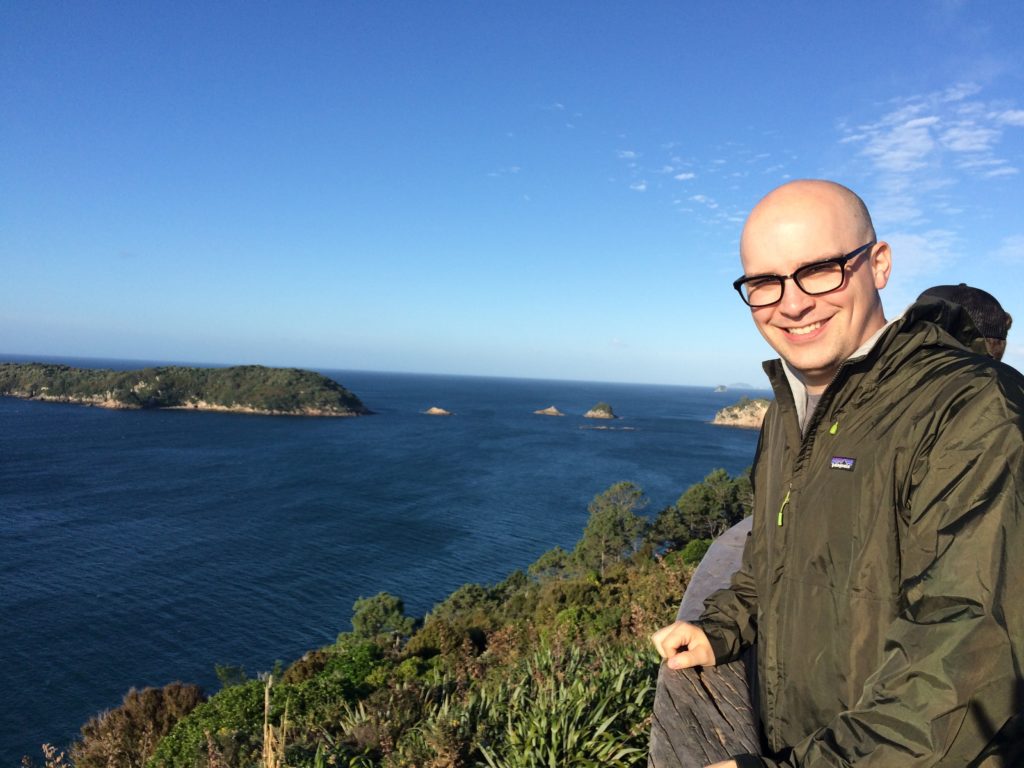 We were greeted by pristine waters and the most clear sky we’d seen in days. We thoroughly enjoyed the viewing deck and started the hike toward the beach itself. 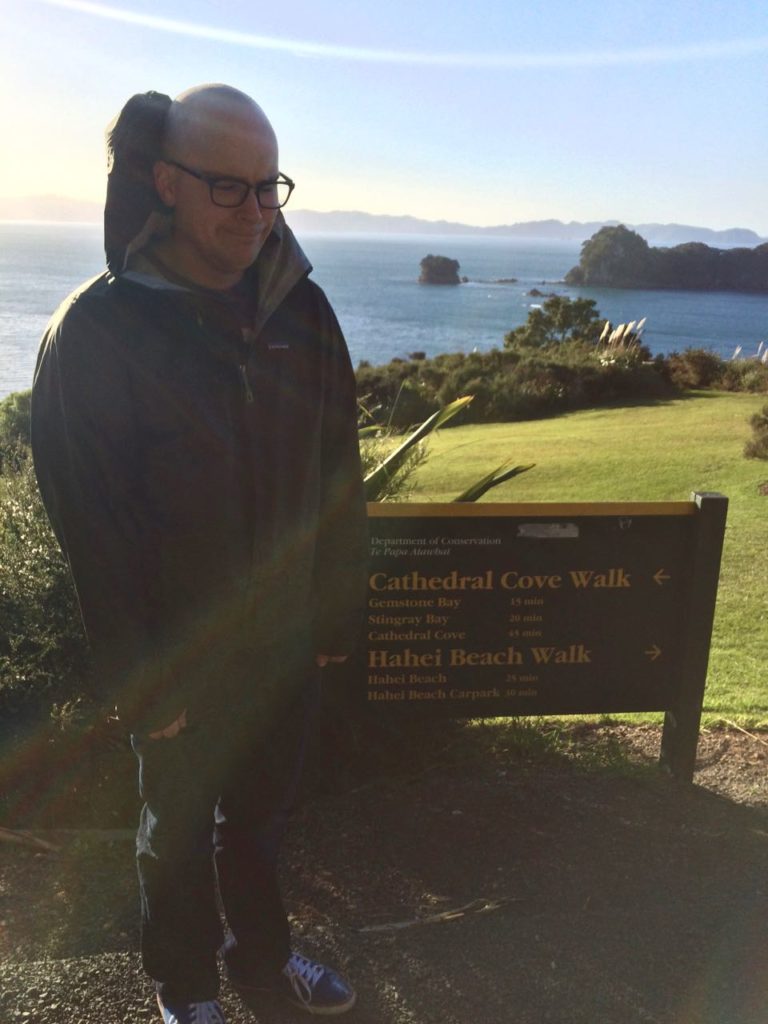 We saw the hike-time. We didn’t realize the trek was an estimated 1.5 hour roundtrip. Whoops! With all our planning, we hadn’t come across a note about the suggested time allowance for Cathedral Cove. We didn’t have enough time to hike down to the beach and still catch Hot Water Beach at low tide.

We will return! No doubt. In fact… folks planning to visit us should put in their orders. We would be happy to take you to Cathedral Cove and Hot Water Beach while you’re here, if you desire. We’ve worked out the bugs!

We headed to Hot Water Beach and were hoping to dig ourselves the most lavish sand-made hot tub anyone had ever seen! The beach boasts the rare quality of geothermal springs that can be accessed at certain parts of the day. Dig down and build some walls to enjoy the warmth.

Sadly, by the time we’d arrived- most of the hot spots (literally) were claimed. We dug around for a while, made ourselves a nice hole… but the heat wasn’t really part of our experience. Haha… We had fun anyway, and next time we will arrive earlier. 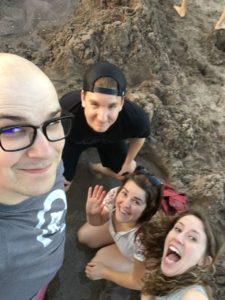 We did find a couple springs that could have been used, but the tide was already heavily infringing on the space, so it wouldn’t have lasted more than a few minutes.

Thankfully, it was a really fun day with beautiful weather! Our evening was rounded off with another windy road home and a satisfying supper at our local brewpub.

We are learning the ways of the land and look forward to feeling more like locals soon. Until next time!